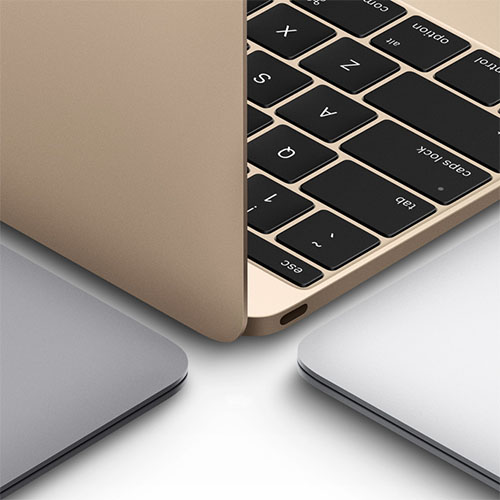 The new MacBook is almost down to a single connector as Apple continues to banish supposedly legacy features from its super-thin notebooks.

Apple tends to lead the way when it comes to ditching old technologies from computers, which might be appealing for digital trendsetters but can be frustrating for business users who are slower to change their ways. Not everyone is in a rush to replace all their accessories, or buy a bag full of adapters, just because Apple has decided that it’s time for change.

These days few people might lament the lack of 3.5inch floppy drives and CD/DVD optical drives in Macs, but at the time of their demise it was a serious inconvenience for some people.

Now Apple has moved its attention to connectors, whether you’re ready or not, as part of the push to build ridiculously thin and light MacBooks.

The crackdown started with FireWire and Ethernet gradually disappearing from Mac notebooks. Now the MagSafe power connector has vanished on the new 12-inch MacBook, replaced by the new USBC port. USBC uses a reversible plug, which means you’ll spend less time fumbling with cables, but this benefit comes at a high price.

USBC is not compatible with standard USB plugs but you won’t find even one USB port on the new 12-inch MacBook. Nor will you find a Thunderbolt port or an SD memory card slot.

Apart from the USBC port where the MagSafe power connector once was, you’ll only find a 3.5mm audio jack – which is surely living on borrowed time when you consider Apple’s love of Bluetooth wireless devices.

With the rise of USBC, Apple’s MacBooks are approaching the connector singularity. Apple includes a USBC power cable in the box, but you’ll need adapters for everything else. You’ll find two $119 Multiport AV adapters in the Apple store. You’ve the choice of a VGA or HDMI video output, plus each has one standard USB port and one USBC port so you can still charge your MacBook while using the adapter. There’s also a $29 straight USBC to USB adaptor.

As for Ethernet, you can use an Ethernet to USB adapter with the Multiport AV adapter, or else look to a third-party USBC to Ethernet adapter from the likes of Belkin.

One good thing about USBC is that it’s an industry standard, which makes it easier for Belkin and other accessory makers to cater to MacBook users. Apple isn’t alone, you’ll also find a USBC power connector on Google’s new Chromebook Pixel 2 – but at least Google still leaves you with two USB3.0 ports for connecting up your various accessories.

Apple users might notice that there’s no talk of Thunderbolt adapters with the new MacBook, because USBC can’t support Thunderbolt devices – which could come as a shock to loyal Apple customers. For the last few years Apple has been pushing Thunderbolt as the all-in-one connector standard to replace video, USB and FireWire cables. Too bad if you’re interested in the new USBC MacBook and you’ve already spent good money on Thunderbolt accessories.

Apple continues to support Thunderbolt, MagSafe and USB on its MacBook Pro and MacBook Air notebooks, which just got an upgrade to Thunderbolt 2, creating a big split in Apple’s notebook line up. Living an Apple-centric lifestyle means you’re sometimes forced to jump on the upgrade treadmill. If you’ve got your eye on the new MacBook, make sure you appreciate what you’re losing as well as what you’re gaining.