Apple recalls power adaptors: What you need to know 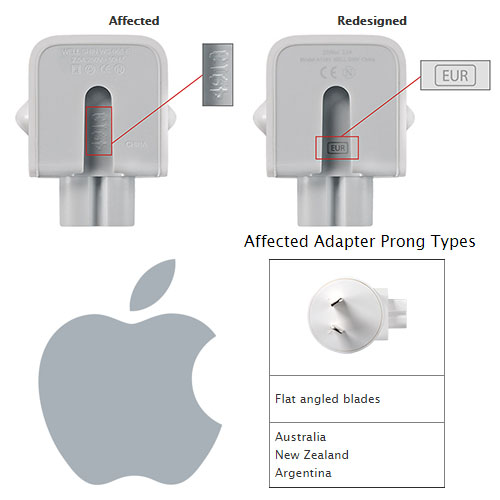 Apple’s issued a rather urgent recall on power adaptors for its iPhone, iPod Touch, iPad and Macbook computers, based on the possibility that they may easily break and leave users susceptible to electric shock. For what it’s worth, the scale of the problem could be quite wide, with adaptors sold on Apple equipment dating from 2003 all the way through to 2015 potentially susceptible, but Apple’s only identified 12 cases from all that time. When you put that against the sheer number of devices Apple’s sold in that time, it’s statistically not that huge. Then again, as with anything electrical, there is absolutely zero point in taking risks.

So how can you tell if you’ve got an iffy adaptor? For this, you need to examine the plug end. Apple ships its plug adaptors for Macbook and iOS devices in two parts, with a section that connects to the device. For a Macbook this is a magsafe magnetic adaptor, whereas for iOS devices it’s a USB connection out to either a 30 pin dock plug or lightning plug, depending on the age of the device. This is clicked into the actual plug-into-the-wall part, known as a “duckhead”. Look at it sideways and you’ll work out why.

The duckhead is the important bit to check. If it’s essentially rectangular, you’ve got one of the newer, safe duckheads and you don’t need to do anything else at all. If, however, it’s a round duckhead plug type, you need to separate it out from the other plug section and check the interior inside slot. This is the section that slides down and locks into the main body of the power adaptor. It will either have a three letter code — if you bought your Apple equipment in Australia it’ll read “AUS” — in which case it’s perfectly safe, or a four or five digit code, or possibly no code at all.

It’s those latter cases — 4/5 digit code or absence of code — that indicates it’s part of the batch being recalled. If that describes your duckhead plug, you should contact Apple or an authorised Apple Service Provider to arrange a swap for the new, safer rectangular plug type.

There’s one other factor to bear in mind here if you’ve got a Macbook, Macbook Pro or Macbook Air with a potentially suspect plug. The issue is only with the duckhead part that slots directly into the large square power adaptor for Macbooks, and again is only of concern if you have the round type plug. What’s key here is that Apple supplies two plugs in their Macbook boxes. There’s a straight duckhead, and then there’s an extension cable type connector that goes out to a more triangular looking plug head. If you’re using the second type extension, you’re perfectly safe and don’t have anything to worry about, although it’d be sensible to get the other duckhead plug swapped out at your convenience, simply because if the extension cable snaps or similar you’d still be able to charge your Macbook without having to buy an entirely new adaptor.

Apple has set up a web site that runs through the plug types and your options for procuring a replacement, including if you’ve already purchased a replacement from Apple due to the plugs breaking; in that case there’s the possibility of a refund in the cards for you.