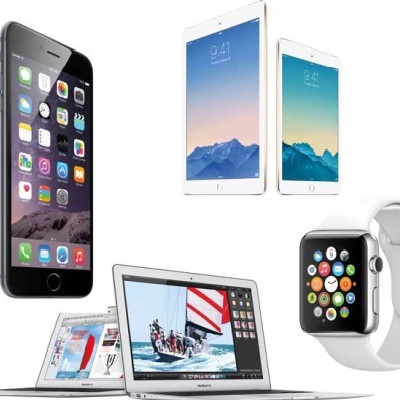 Apple recently announced the long-awaited availability of its Apple Watch smartwatch device. For those interested, it works with iOS devices as a notifications and tracking device, and will cost from $499 for the entry level “Sport” model all the way up to an eye-watering $24,000 for the premium, limited edition 18-carat rose gold case “Apple Edition” model. Something tells me that Apple probably expects to sell more of the entry level Sports and straight Apple Watch models than the premium watches, which are pretty clearly marketed towards the fashion end of the market more than the technology end.

That wasn’t what particularly caught my eye in Apple’s recent round of announcements, however, because outside of pricing and battery life — which Apple rates for “up to” 18 hours, depending on usage — there wasn’t much more “new” to know about the Apple Watch. Instead, what got me interested were Apple’s moves in laptops, both updating the existing MacBook Air and MacBook Pro lines, and adding a new twist to an existing formula with a 12″ screened MacBook line that seriously blurs the lines between Apple’s laptop categories.

The star of the show was the new 12″ MacBook, which will sell in Australia for $1799 or $2199 depending on internal storage and processor specifications. It’s Apple’s thinnest laptop, using Intel Core-M processors. Core-M sits in an interesting space for Intel, as it’s the middle ground between the higher end Core i3/5/7 processor line that chews up battery life, and the power-sipping-but-less-powerful Intel Atom processors. Apple’s not alone in using Core-M, which can be found in a number of other thin and light laptops such as Lenovo’s Yoga Pro or Toshiba’s Portege Z20t (www.fatducktech.com/reviews/toshiba-portege-z20t-review). Core-M systems also benefit from being able to use fanless designs, which makes them theoretically quieter and even more conservative when it comes to battery life. Apple’s claim with the new MacBook is that its logic board is relatively tiny, allowing even more space for specially shaped batteries to eke out as much battery life as possible.

Further in the technology innovations space is the fact that there is only one primary socket on the entire MacBook, excluding a standard headphone jack. It’s a USB type C port (USB Type-C brings an end to USB plug woes) that’s fully reversible and acts as both an interconnect for data and video inputs and outputs, as well as power. Apple will sell a variety of adaptors if you are the plug-happy type, but the contention here is that you’ll be storing as much as possible in the cloud, and as such, it’s a pointer to a less cable cluttered future.

Apple’s bet heavily on this kind of disruption before. The original MacBook Air omitted an optical drive to the dismay of some, although that’s now quite a common feature. Going back even further, the original iMac left out a floppy drive entirely, instead relying on the then-nascent USB standard for connecting up devices. Will a USB-C only approach work for Apple? Only time will tell.

Not that the MacBook was Apple’s only notebook change. The Macbook Air and Macbook Pro models got a slight specification bump up to fifth generation Intel Core processors, which vary depending on how much you want to spend on them. The MacBook Air is now Apple’s only line without a high resolution (Apple calls it “retina”, but uses the term to mean many different resolution types depending on the size and type of screen on offer) display, but with Core processors they’re more powerful than the similarly priced but more portable MacBook lines. The MacBook Pros are still Apple’s most expensive laptops, but with more ports, power and configuration options they’re also the ones best suited to heavy duty use.

What’s also fascinating here is that the figures that Apple does release — noting that it never breaks out Australian figures specifically — suggest that laptops and desktops (such as the iMac and Mac Pro lines) actually only make up a small fragment of Apple’s overall sales, which are dominated by iPad and especially iPhone sales. Apple could pretty easily abandon the “computer” market and only feel a little overall sales pain, but it hasn’t opted to do so — or at least not yet.