Are stripped-down computers good for productivity? 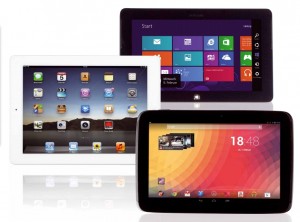 Traditional IT productivity strategies generally involve a combination of personal computers and dumb terminals. Throughout the office a Windows PC is plonked on every desk, while notebook PCs are slid into some travel bags.

Creative types might demand a Mac instead of a Windows box for graphics work, but either way there’s a fully-fledged desktop computer on every desk.

Of course access to a fully-fledged desktop computer can be overkill when staff are only using it as a glorified typewriter.

With a full desktop operating system comes management complexity, which obviously impacts on your bottom line. That’s why large task-oriented workforces, such as call centre operators and other public-facing staff, are often exempt from the “desktop PC on every desk” strategy employed in the head office.

Instead large task-oriented workforces are usually issued with simple “dumb” terminals designed to run a single application, such as a telemarketing or call centre solution. This single application might run on that end device, but more likely it runs on a central server or in the cloud so you can easily swap out a faulty terminal. It’s an effective strategy which makes life easier for everyone, as long as you don’t need those staff to do anything out of the ordinary.

The strategic use of PCs and dumb terminals has long been the backbone of a corporate IT strategy, but lately we’ve seen the rise of a third category of computing devices which are more useful than a dumb terminal but less flexible than a Windows PC. We’re entering what’s often referred to as the “post-PC era”, with consumer-focused tablets such Apple’s iPad and its Android rivals leading the way.

As these gadgets push into the office, Microsoft is pushing back with the stripped-down Windows RT – also blurring the line between consumer and corporate devices. Meanwhile Google’s Chrome OS is finally finding its feet on Google’s Chromebooks.

Both Windows RT and Chrome OS promise to deliver the productivity benefits of a desktop PC without the underlying complexity, but it’s a promise they can’t always keep.

Windows RT is basically a stripped-down version of Windows 8 which lets you run the tablet style, touch-friendly Modern UI interface. Similar to an iPad, you can install apps from Microsoft’s growing Windows Store. Unlike an iPad, you can push aside Modern UI to view the traditional Windows desktop. Here you’ll find simple versions of Microsoft Word, Excel, PowerPoint and OneNote, but you can’t install your own desktop applications such as Outlook or Photoshop.

Meanwhile Google’s Chrome OS is a stripped-down version of Linux designed to do little more than run Google’s Chrome web browser. You can also install a range of plugins from the Chrome Web Store, as you can when running Chrome on a desktop computer.

Of course the growing focus on cloud services, such as online Office suites, makes Google’s Chromebook surprisingly useful. But once again, you can’t install desktop applications such as Outlook or Photoshop.

One frustration with these devices is that they aren’t designed to tightly integrate into a corporate environment. Windows RT supports Exchange ActiveSync for mobile device management features but not Active Directory for connecting to in-house resources. You’re not going to find Active Directory support in Chrome OS either, and Google is even turning its back on Exchange ActiveSync. Google offers its own remote management tools for Chromebooks, but it might not be welcomed with open arms if your IT department is an old-school Microsoft shop.

Of course the most significant limitation of Windows RT and Chrome OS is that you can’t install your own desktop software – which is both a blessing and a curse.

Meanwhile the inability to install desktop software is a curse if your employees need more flexibility than your average call centre operator. It’s possible that the Windows and Chrome Web Stores might meet all their needs, but for a few dollars more you could buy a fully-fledged Windows 8 device which can offer the best of both worlds.

You’d obviously trial a handful of Windows RT or Chrome OS devices before you contemplated a wider roll out, but your first test phase might be even simpler. Hand someone a shiny new Windows 8 device but tell them they’re only permitted to use the Modern UI interface or the Chrome browser. Even with access to the app stores, can they survive a week without succumbing to the temptation of using other desktop software to get their job done (apart from the Office applications bundled with Windows RT)?

Some staff might find such restrictions frustrating, while others might find them liberating. Some might decide that these post-PC devices work better as travel companions, augmenting the PC sitting on their desk rather than replacing it.

This simple first taste of stripped-down environments might help shape your long-term computing strategy in the post-PC era.