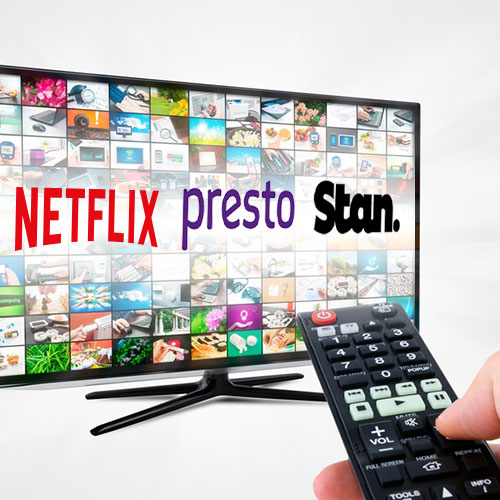 With Netflix, Presto and Stan all arriving in Australia this year, how do you decide which subscription video service is the best fit for your home?

These all-you-can-eat streaming video services put a wealth of movies and TV shows at your fingertips for a flat monthly rate – which can be a bargain for busy households with diverse entertainment tastes. Each video service offers a one-month free trial, so you can sample their wares, and it’s easy to sign up via their websites.

They all let you watch video on a computer via your web browser. They’re also available for smartphones and tablets, you’ll find them in the app stores.

Unfortunately support for home entertainment devices like Smart TVs is more hit and miss. If your device offers Netflix, Presto or Stan then it will probably be prominently displayed on the internet video home screen alongside the free-to-air Catch Up TV services like ABC iView. If it’s not there, trying looking in the device’s app store, refreshing the list of available apps and checking if there’s a software update for your device.

Before you sign up, it’s worth checking with your Internet Service Provider to see if you can get a free extended trial for any of these video services. Also check whether the data you chew through is “unmetered” – meaning it doesn’t count towards your monthly download limit.

Netflix’s $8.99 entry-level plan is the cheapest of the bunch, letting you watch Netflix movies and TV shows on one device in Standard-Definition. For $11.99 you can boost this to High-Def on two devices simultaneously, while $14.99 gets you Ultra High-Def on four devices. To stream in HD you need broadband speeds of around 5 Mbps, while the step up to Ultra HD requires a compatible Smart TV along with broadband speeds of at least 15 Mbps.

Unlike the other video services there’s no limit on the number of devices you can associate with your Netflix account, only the number of simultaneous streams. This is handy considering that Netflix is built into so many home entertainment devices – like the Apple TV, Google Chromecast, Telstra TV and Fetch TV streaming boxes as well as Smart TVs, Blu-ray players and games consoles.

Apart from support for so many devices, you also benefit from the strong line-up of Netflix Originals which includes House of Cards, Marco Polo, Daredevil and Orange Is the New Black.

Presto offers a choice of three services – for $9.99 per month you can get Presto TV or Presto Movies, while Presto Entertainment offers both for $14.99 per month. You can register four devices with your account and stream to two simultaneously.

Presto recently upgraded much of its library to High-Def, but you’ll need download speeds of at least 7.5Mbps to see the difference. Bigpond customers can watch Presto on the old Telstra T-Box or the new Telstra TV, plus it works with the Google Chromecast. There isn’t an Apple TV app, but you can send Presto video from an iGadget to the Apple TV using Apple’s AirPlay streaming format.

Presto’s strength is its access to premium HBO content which you won’t find on Netflix and Stan, like Game of Thrones. You don’t see new episodes as soon as they screen on Foxtel, Presto’s library tends to lag a season behind. It also tends to get new-release movies before the other services.

Stan is pushing to be on a wide range of home entertainment devices. You’ll find apps on Telstra TV and Apple TV, along with the ability to stream to Google’s Chromecast. The service is also available on Sony’s PlayStation 3 and 4 game consoles, with other devices expected to follow.

Stan has a good mix of movies and TV shows, including Australian deals with the ABC and SBS. It’s offered a few Australian exclusives, like Breaking Bad spin-off Better Call Saul, plus it’s starting to commission its own TV shows such as a spin-off series of the Australian hit film Wolf Creek.