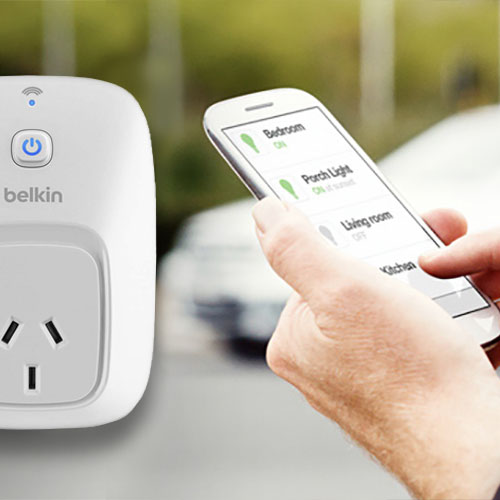 In the IT field, there are new products, old products, and every once in a while, a product that’s a fusion of a couple of existing products in an interesting way. Belkin’s WeMo Insight rather firmly fits into that last category.

A couple of years ago, I reviewed the Belkin Conserve Insight — you can read my thoughts on that here — and just recently, a new Belkin product, the WeMo Insight Switch.

It is, it has to be said, not that much to look at. It’s a rather chunky plug with a socket in the front of it so that it acts, in effect as a passthrough power socket. Its large size means it doesn’t play all that well on a powerboard unless the sockets are very generously spaced apart.

It’s dubbed the “Insight” because, like that much older Conserve Insight Switch, which you won’t easily find on store shelves any more, it takes note of the usage pattern of devices plugged into it, so that you’re more aware of the overall usage of, say, a heater, or a TV over time. That kind of knowledge can be, if you’ll pardon the pun, quite powerful, because it can seriously change the way you use certain appliances, or your appreciation for how little (or how much) they hit your power bills with.

Where the older Conserve Switch had a digital display, which was easy to read when it was in front of you but slightly annoying if placed behind a large electrical device, the Belkin WeMo Insight Switch instead ties into Belkin’s existing WeMo home automation range.

What that means in practical terms is that instead of having a digital display, all the data that the Belkin WeMo Insight Switch collects is sent up to the cloud, where you can access it via Belkin’s WeMo app for iOS or Android devices. The app itself is nicely laid out, with intelligent interface setup for designing rules, so you aside from taking a reading, you can also set a power/on off state depending on other variables, or even the input from other WeMo devices. If that’s all you want, mind you, Belkin already sells a straight WeMo Switch for around $69, $30 cheaper than the Belkin WeMo Insight Switch. Equally, if all you wanted was the power measuring side of the equation, any number of electronics stores will sell you that kind of plug for around $20-$30.

The WeMo app is the focal point of the WeMo experience, and while it’s well laid out, it can be a little twitchy in real world use. Setting up the Belkin WeMo Insight Switch involves connecting to the ad-hoc Wi-Fi network it creates initially, hooking that into your existing wireless network, and then accessing it via the app, which can be done while you’re in your home or office, or out of office if you’ve got an Internet connection.

At least, that’s the theory. I’ve been using WeMo gear for a few years now, and while I do like what it can do, there’s little that’s more frustrating than when the WeMo app won’t see an already registered device. Sometimes restarting the app or replugging the device helps, and sometimes app updates, when they come through, will fix temporary connection problems. The WeMo experience is easy enough to set up, but it’s not exactly flawless.

So would I recommend the Belkin WeMo Insight Switch? As a standalone device at $99, it’s neat, but hardly essential if all you want is a little power management. If you’re already using other WeMo gear and can build it into an ecosystem that handles intelligent lights and security management, however, it’s only a $30 premium over an existing WeMo switch — which is exactly what you’d pay for this kind of standalone meter anyway.