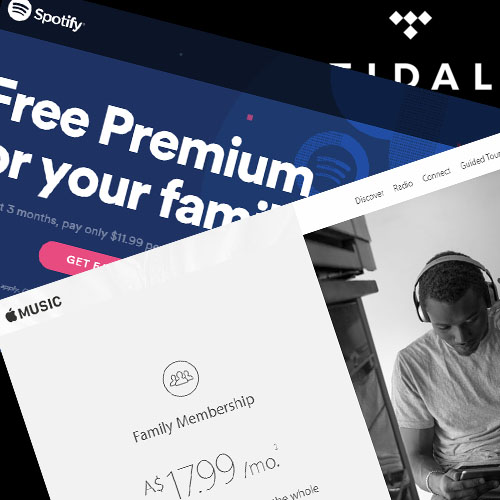 When you head to the supermarket, the chances are high that you’ll buy large packages of the things that you need in order to maximise the intervals between visits to the supermarkets. Sorry supermarkets, but I’ve never met anyone who loved visiting you per se.

When we buy software, however, we don’t always think that way, although we should.

To take an example of a software service that’s seriously exploded in recent years in popularity terms, consider streaming music.

There are numerous streaming music services that you can subscribe to, from Spotify to Tidal to Apple Music to Google Play Music, all of which operate off an “all you can eat” style model where you pay a flat single monthly fee for a single music stream of whatever’s on their service that takes your auditory fancy. Music being music, and leaving aside the relative availability of a given artist — Taylor Swift, for example, is notable for her dislike of Spotify but had few problems signing up with Apple Music — they can all be much of a muchness, with a general price point hovering just north of $10 per month for unlimited single stream access.

If you listen to enough music it’s a fair deal, although not every taste is catered for, and if you do still own a number of CDs it’s worth pointing out that it’s perfectly legal to rip them to as many devices as you’d like for personal uses in Australia.

But what if you’re part of a family and don’t want to share a “single” stream? It’s quite likely that your tastes differ from those of your kids (or, conversely, depending on your circumstances, your parents), and sharing a single music stream across multiple music tastes can lead to weird recommendations based on what the software detects as your musical “taste”, not to mention arguments on what you should listen to next.

Google recently started offering a $17.99 “Family Pack” for its Google Play Music service. This entirely mirrors Apple Music’s Family offering, which has the same price point and the same number of enrolled users. You get up to six, which should encompass all but the largest families, all tied to a single master account which pays for it all. $17.99 is higher than the regular $11.99 monthly price, but it’ s a bargain compared to paying $71.94 for six distinct accounts, after all.

This kind of bulk buying is commonplace when you hit the supermarket — the bigger pack of sugar, soft drink or toilet rolls is typically cheaper at a per-unit level than the smaller one — but it’s not exclusively tied to just streaming services either. Apple notably doesn’t much care if you share a single Apple ID across multiple IOS devices, or set devices as “family” members of a single account either. Microsoft offers a “Home” version of its Office 365 package that allows up to four PCs to run Word, Excel, PowerPoint, OneNote, Outlook, Publisher and Access across five devices for a price that’s only slightly higher than that of a regular Office 365 subscription. Plenty of anti-virus/malware packages offer the same kind of multiple machine discounts as well, so if you’re running multiple systems at home it can make serious financial sense to check if they’re available.