Can a bigger Surface tempt you into Microsoft’s tablet vision? 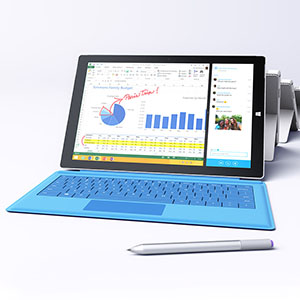 There’s a theory that says that for most Microsoft products, you’ve got to wait until the third revision before they actually produce a product that’s worth buying. It’s a rather harsh theory designed essentially to poke fun at the fact that early iterations of most products are often a little rough around the edges. That’s somewhat to be expected, given that for a brand new product, nobody’s entirely sure what the edges are meant to be in any case.

I could be terribly pedantic and point out that Microsoft’s Surface Pro 3 isn’t in fact the third generation of Surface, partially because in previous years they’ve split the lines between the Surface Pro and Surface RT lines, and partially because before Microsoft used Surface to denote its tablet lines, it used the term to denote a large table-sized touch computer sold to businesses such as hotels.

For those unfamiliar with Surface, it’s Microsoft’s tablet product. In the Pro lines, it runs full Windows 8.1, putting it in an interesting space between a tablet such as an iPad or a Galaxy Tab or a “full” laptop.

Still, amidst all the hype surrounding the recent launch of the Surface Pro 3 which naturally wants to talk up the new tablet, it actually looks like Microsoft might be onto a bit of a winner with its (ahem) third generation Surface offering. It’s slightly larger than the Surface Pro 2 with a 12 inch display sitting on a 9.1mm thick chassis that weighs in at a scant 798 grams. Microsoft’s pitch for the Surface Pro 3 is that it’s as much a laptop replacement as it is a tablet competitor, although whether end users actually agree and flock to buy the Surface Pro 3 remains to be seen. We’ll be waiting a while, too; you can “pre-order” the Surface Pro 3 now, but it won’t actually ship in Australia until August.

Microsoft made an important change in the Surface Pro 2’s kickstand relative to the original Surface, making it adjustable to two angles and thus more lap-friendly. With the Surface Pro 3 it’s gone further with a kickstand that, so Microsoft claims, can sit at any angle between around 22 and 150 degrees. That should make it a worthy lap companion.

The laptop/tablet hybrid nature has always been part of the “pro” line of Surface tablets, and that’s reflected in the asking price of the Surface Pro 3. The entry level 64GB model has an Intel Core i3 processor and will cost $979, while the top of the line 512GB Core i7 model will cost $2279. Both of those prices are without an external keyboard, however. If you do want that more laptop style experience, the Surface Pro Type cover will cost you $149.99.

What wasn’t mentioned in the Surface launch was the Surface Pro’s little brother, the Surface RT, which was renamed the Surface 2 in its second generation. The RT lines run Microsoft’s ARM-based Windows RT, which looks ostensibly like Windows 8.1, but doesn’t have any compatibility with actual Windows code, meaning that the only applications that run on Surface RT devices are those that are custom built for it. The hook there is meant to be that you’ll be swooning over the fact that it comes with Microsoft Office inbuilt, but that’s not entirely made them best-sellers. Then again, Microsoft’s also just recently launched the Lumia 2520 tablet — having purchased the Lumia name and the hardware division that made them from Nokia — which is a Windows RT device. It’s a little cheaper than the Surface Pro 3 at $840, also sans keyboard, but with Windows RT on board it’s also a lot more limited.