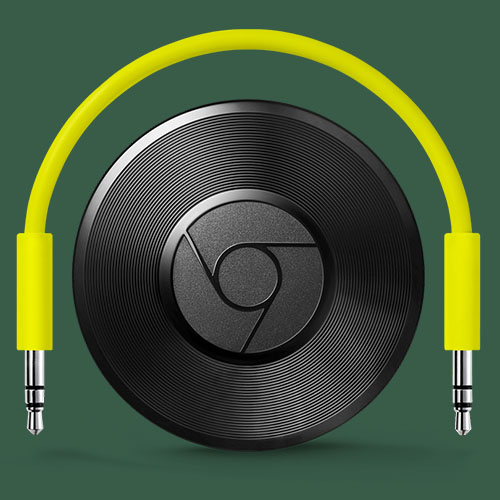 Rather than leaving your music locked away on your gadgets, it’s easy to stream it to the furthest reaches of your home with Google’s tiny Chromecast Audio adaptor.

It doesn’t look like much but the palm-sized $59 Chromecast Audio is an impressive little gadget. It connects to your Wi-Fi network, supporting both 2.4 and 5GHz networks – with the latter faster and less susceptible to wireless interference. There’s also a combined analogue/digital audio output – designed to connect to any powered speakers or amplifier in order to grant them a wireless overhaul.

The adaptor is powered via micro-USB using the supplied AC adaptor and you can plug it in anywhere as long as it’s within range of your wireless network.

The Chromecast Audio adaptors appear as wireless speakers to the other devices on your home network. You can stream music from compatible Apple and Android apps as well as Google’s Chrome desktop browser. It’s not compatible with Apple’s AirPlay streaming format.

When streaming from a mobile device you can even send the same music to multiple speakers simultaneously, in perfect sync. It’s a neat trick which lets you group your speakers into zones, perhaps streaming the same song throughout the house during a party and then switching to different music in the dining room and lounge as the night winds down.

At $59 you might expect something cheap and nasty but the Chromecast Audio has a few features designed to win over audiophiles. There’s a Full Dynamic Range option which boosts the sound quality when you’re using high-end speakers and high-quality content. The adaptors also support 96KHz/24-bit lossless audio playback if you’re not a fan of compressed audio formats like MP3.

If you’re looking to set up a multiroom audio system on a tight budget then it’s hard to go past Google’s Chromecast Audio, although you’re obviously still at the mercy of the quality of the attached speakers. Whether you’re tapping into your own music library or an all-you-can-eat subscription service, the Chromecast Audio ensures your favourite tunes are never far away.