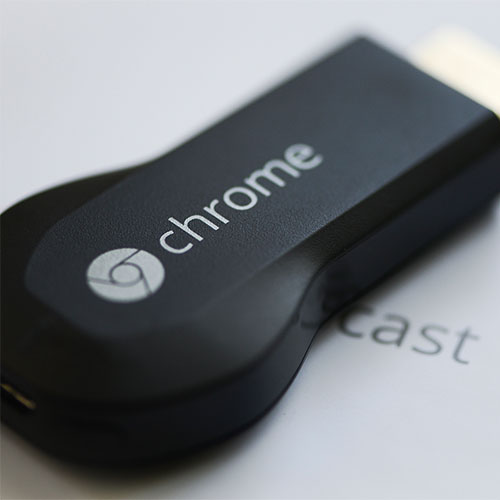 If you want to hire movies online and watch them on the biggest screen in your home, Google’s Chromecast is the cheapest and easiest way to bridge the gap between your television and the internet.

The ability to hire movies on a wintry Saturday night without having to get off the couch is great, but you might not be content to watch those movies on your computer, smartphone and tablet. There are plenty of lounge room devices which bring internet video to your television, but Google’s tiny Chromecast sets a new benchmark when it comes to price and ease of use.

The Chromecast will only set you back $49, whereas alternative streaming media sticks and set-top boxes are likely to cost you at least double that. In return the Chromecast is pretty basic – it’s just a dongle with an HDMI plug on one end for connecting to your TV and a micro-USB port on the other end for power. There’s no Ethernet port, it connects to your home wi-fi network for internet access.

This simplicity is actually a strength. You don’t get a remote control with the Chromecast, because you drive it with your computer, smartphone or tablet. All you need to do is open up a Chromecast-compatible service, look for the Chromecast icon and tap it to select your Chromecast stick as the playback device. In a few seconds you’ll see the picture on your television.

Australian video services supporting the Chromecast include Quickflix, EzyFlix, Google Play and Foxtel’s Presto. Right now the Chromecast is the only way to watch Presto movies on the big screen, unless you plug a computer into your television. It’s a similar story with EzyFlix and Google Play, which currently only work with a handful of expensive smart TVs.

Meanwhile Quickflix is available on a wide range of home entertainment gear, but the Chromecast is certainly a handy addition. Quickflix even grants you $10 credit when you link a Chromecast to your account.

It’s true that you can use iOS or Android screen mirroring to get these video services from a handheld device to your television – but you’d still need to buy a receiver which plugs into your television (like the $119 Apple TV). Even then you won’t match the picture quality of the Chromecast.

When you’re watching a Chromecast-compatible service like Quickflix, EzyFlix, Presto or Google Play, the Chromecast goes directly to the internet to pull down TV-quality video. The result looks much better than sending mobile-quality video from your phone to your television.

Next time you’re planning a big night in, consider whether Google’s Chromecast might be the most practical way to get the best of the internet onto your television.