Dance the night away with multi-room audio 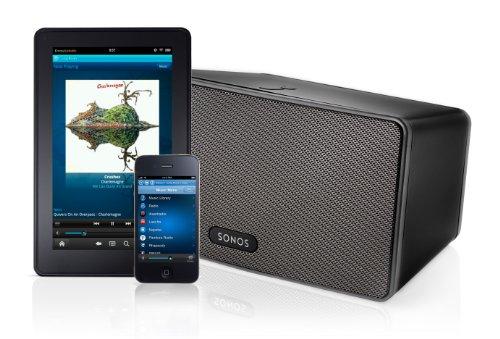 Why leave your favourite tunes locked away on your computer when you can easily play them in any room?

The digital revolution has changed both the way we purchase music and the way we listen to it. An unfortunate side effect is that our favourite tunes now tend to stay locked away in our computers and other gadgets. Thankfully it’s not too hard to put together a multi-room audio system which lets you stream music to speakers anywhere around the house. If your budget is tight you can start small and expand the system over time.

The holy grail of multi-room audio is the impressive Sonos Digital Music System. It lets you place speakers around your home which then create their own private wireless network. As long as one is connected to your home network, any speaker can play music from your home music library, internet radio or an all-you-can-eat subscription music service such as Spotify, Rdio or MOG. You can control the system from your computer, smartphone or tablet and it’s easy to play different songs in different rooms or the same song everywhere. With a recent Sonos update it’s now also possible to play music straight from an iPhone or iPad.

To be honest the Sonos Digital Music System is a little expensive, but it’s getting cheaper and if your budget will stretch it’s an investment you won’t regret. If Sonos is beyond your reach thankfully you can still cobble together a basic multi-room audio system to replicate many of Sonos’ features. The easiest route is to use Apple’s AirPlay streaming system, or else you might look to the Logitech UE range (the old Logitech Squeezebox range has been retired).

Apple’s AirPlay lets you send audio from any device running iTunes to speakers around your home connected to an Airport Express or Apple TV which is connection to your home network via Wi-Fi or cable. The source of the music can be a Mac or PC running iTunes, or else an Apple smartphone or tablet. The ability to stream music from an Apple TV was lost when Apple abandoned the hard drive, but it’s still possible if you own a first-generation Apple TV.

You can control AirPlay remotely from an iGadget, for example using your iPhone to control the music coming from your computer and streaming to the living room — which is really handy when you’re hosting a party. Unfortunately you can’t control AirPlay from another computer, which is frustrating when you’re working on your PC but need to reach for your phone to change the music.

AirPlay can play the same song in multiple rooms, again great for parties, but the music needs to come from a computer or first-gen Apple TV (an iGadget can only stream to one room at a time). If you want to play different music in different rooms you need more than one audio source running iTunes. So if you want to chill with Miles Davis while the kids bop to High 5 in the next room, you’ll need to use a different computer or iGadget to supply the music to each room. Unlike Sonos, AirPlay won’t let you stream your music collection from your Network Attached Storage drive even when all your computers and gadgets are switched off. Sonos also gives you access to a wider range of internet radio stations.

AirPlay is obviously Apple-centric, although there are some handy workarounds which make it more flexible. You’ll find AirPlay-compatible Android apps which let you stream music to speakers around your home.

Whether AirPlay is more cost effective than Sonos depends on how much you’re spending on speakers to attach to your Airport Expresses. If you’re an audiophile you should certainly give the Sonos system a listen in a hi-fi store, but for everyone else Apple’s AirPlay could be the budget multi-room audio system you’ve been waiting for.