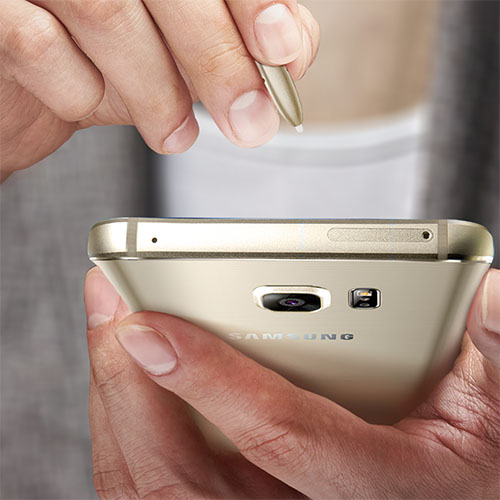 Samsung typically has two flagship smartphone product releases in a given calendar year. Earlier in the year its smaller screened Galaxy S6 and Galaxy S6 Edge phones were released, and just recently in Australia, it launched its two new larger screened — often referred to as “phablets”, because they’re not much smaller than a tablet and a little larger than a phone — devices.

Samsung can claim pioneer status in the phablet field, having launched the first of its Galaxy Note devices back in 2011. This year Samsung’s done something a little different, as along with the expected Galaxy Note 5, it also launched the Galaxy S6 Edge+, which, as the name suggests, isn’t a Note device, but is instead a large screened phone with essentially the same specifications as the Note 5, but no stylus. Yes, it’s confusing; Samsung’s pitch is that a lot of people were buying Note devices because they liked having the large screen, but they weren’t actually using the “S-Pen” stylus all that much. The S6 Edge+ is thus a large-screen version of the curved display S6 Edge launched earlier this year, but a little quicker and with a slightly larger battery, because having more screen space means there’s more room out the back to throw batteries in.

If you’re in the productivity-loving Note crowd, the Note 5 is a solid and expectedly fast device — both it and the S6 Edge+ perform as you’d expect premium priced smartphones to do — with just a couple of minor catches. Both phones are entirely sealed devices. That means you can’t swap the battery out, and Samsung’s solution for that involves fast charging capability that does work quite well. The other thing you can’t do is add any additional storage to a Note 5 or S6 Edge+. Internationally, they’re sold with either 32GB or 64GB of onboard storage, but officially in Australia, the Note 5 will only be sold in the 32GB variant.

The other issue is a geniunely weird one. Previous generations of Note device made it tough to put the stylus in the wrong way around, but the Note 5 doesn’t really stop you doing so. The issue there is that if it’s put in the wrong way around, it can easily get stuck, and may break the detection mechanism that makes the Note 5 aware you’re about to use the pen. Samsung’s only response has been to suggest that users carefully read the user manual, which suggests that you might get short warranty shrift if you accidentally did put the pen into the Note 5 in reverse.

It’s a pity that Samsung’s made such a silly design mistake, because otherwise both devices are quite glorious examples of what you can do with a premium phone. They’re both very quick, but they’re also genuinely attractively designed, especially the Galaxy S6 Edge+. I’ve been using one as my primary phone for a couple of weeks now, and the battery life and camera are both superb, with quite easy all-day battery life and solid and fast photo shooting ability. The edge on the S6 Edge+ is meant to be its own productivity tool, with swipes for quick contact and app access, although I’m yet to find either geniunely useful, with the curve a far better aesthetic feature than one you’ll really use all that frequently.

In the Android space there’s nothing that really touches the Note 5 and Galaxy S6 Edge+, but you do pay a price premium for the privilege. The 32GB-only Note 5 is $1099 outright, while the S6 Edge+ 32GB is $1,199 and the 64GB version is $1,299. If you only need a basic smartphone they’re total overkill, and it’ll be fascinating to see where the other primary profit-maker in the smartphone space, Apple, goes with its upcoming phone launches, expected to be the “iPhone 6s” and “iPhone 6s Plus” in price terms.