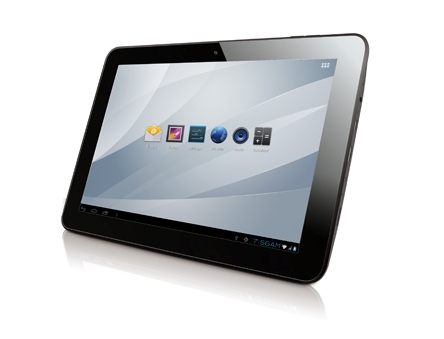 Tablets have quickly come along as replacements for both laptops and desktops, but they’re not always seen as prime productivity machines, unless you’ve got specific applications that take advantage of their touch interfaces.

I was recently sent an extremely cheap tablet in for review, and this got me thinking. I’ve got access to a number of premium tablets as well. Taking into consideration the limitations of most tablet interfaces, is there enough difference in an “expensive” tablet to make it worthwhile, or do the cheap and cheerful alternatives get the job done to an acceptable level?

The contenders
In one corner, the rather obvious heavyweight of the current tablet world, Apple’s iPad. In my case, it was a third generation 64GB 3G/Wi-Fi model. The fourth generation model has a slightly faster processor and, optionally, 4G LTE, and would currently cost you $899.

In the other, the Metalbox MP10, an extremely cheap Android tablet. Really, quite a bit cheaper; the list price on the Metalbox is only $199. That’s quite a difference, although it’s worth detailing what you do (and don’t) get for your money. The display screen is a 10 inch, 1280×800 display , it runs on a single core 1.5GHz ARM processor and has a meagre 8GB of onboard storage, although it will take microSD cards to extend that storage.

You don’t have to muck around with either tablet to realise why one is priced much higher than the other; by comparison the Metalbox feels extremely cheap and cheerful, with a plastic back that shows its inexpensive nature.

But what about in the productivity stakes? If you’re just jotting down notes, there’s not that much of a difference; I used the cross-platform Evernote to tap out a few quick articles and, issues with touchscreen keyboards notwithstanding, both performed well. Equally, at a pure online research level, there’s less than you might think between the two, because web browsing is a fairly standardised experience, and it’s feasible to run the mobile version of Chrome across both browsers.

My other primary productivity test involved remote logging into a Windows PC running the LogMeIn client to access some files, and here I hit an absolute wall with the Metalbox. It could see the application in the Google Play Market — which is generally the sign of an application that will install — but refused to do so. Here, the iPad had no issues, accessing files easily while out and about.

The other factor that worked against the Metalbox — and it’s an issue that’s quite common for cheaper Android tablets — is that the battery life isn’t that exceptional. The exterior packaging suggests a battery life of 6-8 hours of “play” time, but I’m not entirely sure how they’re measuring that; I had a hard time getting it to run for more than around three and half hours before conking out. Irritatingly, unlike many Android devices you can’t charge it via microUSB, either; you’ve got to use a supplied custom charger.

So is the Metalbox (and its low-budget Android tablet fellows) worthless? Not entirely; I’d just say it’s worth its money, but not much more, and within its own specifications, you’d be wise to look at the alternatives. Google’s excellent little Nexus 7 is only $50 more than the base price of the Metalbox, and it’s a much better tablet experience.

If you’re after a more complete tablet experience, especially on the apps side, then the iPad would be a better choice again. You’ll pay a little more, but you’re getting value out of that extra expenditure.