Does your home need a media server? 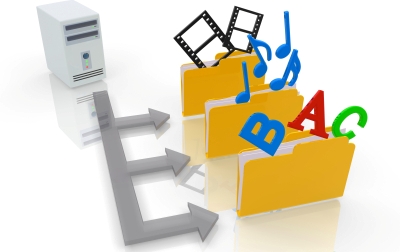 If your multimedia library is haphazardly spread across all your gadgets, perhaps it’s time to build a central home entertainment library.

You’d be surprised at how many media players people have lying around their homes. Every computer, smartphone and tablet is a potential entertainment device, but you’ve also got internet-enabled televisions, DVD/Blu-ray players, Personal Video Recorders, set-top boxes and games consoles. Build yourself a home media server and you can enjoy your music, movies and TV shows on just about all of them.

The concept of building a home media server sounds daunting, but there are several ways to go about it and some are quite easy for beginners. Perhaps the simplest home media server option is to buy yourself a DLNA-enabled Network Attached Storage drive. A NAS drive is basically an external hard drive with a built-in Ethernet port rather than USB. Rather than connecting to one computer, a NAS drive connects directly to your home network via an Ethernet cable. Once connected, its built-in storage is available to all the other wired and wireless devices connected to your home network. Think of the NAS as a central storage point for all your devices.

Along with storing document backups and your media library, many NAS drives can act as a media server to share files around your home. They often support DLNA, a common streaming format which is built into most internet-enabled home entertainment gear. Think of DLNA like another channel on your internet-enabled television or DVD/Blu-ray player. You can simply call up the contents of your NAS on your TV screen, flick through the files with the remote control and click play on the file you want to watch. Then sit back and enjoy the show.

Entry-level NAS options include a WD My Book Live or Seagate GoFlex Home, which come with built-in hard drives. Alternatively you might buy a NAS enclosure such as a Netgear ReadyNAS or Synology DiskStation and then add your own disk drives, making it easier to upgrade to larger drives in the future.

Along with DLNA, some NAS drives can also act as an iTunes server — making it easy to stream music to iGadgets or computers running iTunes. Some NAS makers also offer Apple and Android apps for streaming content to your phone or tablet, often whether you’re at home or on the road. Some Personal Video Recorders, from the likes of Strong and Panasonic, can also act as DLNA servers — making it easy to watch recorded programs from any device in your home.

If you’re looking for a little more flexibility, you might consider turning a computer into a media server. There are plenty of desktop applications which will share your multimedia library across your home network or the internet. Windows Media Player can act as a DLNA server, or you might look to third-party software like Plex, XBox Media Center (XBMC), Air Video, PlayOn, Tversity and PS3 Media Centre. Unfortunately DLNA compatibility can be a little hit and miss, so you’ll need to experiment to find the best media servers for your various players.

Your media server might be a dedicated box which lives in the study, or it could be a lounge room PC which is connected to your television and doubles as a media server and media player. If you go down this path then Plex and XBMC should certainly be on your shortlist, as they can act as both media players and servers. Sometimes your media server will need to “transcode” files on the fly, converting them to a format which your player will happily play. Transcoding requires a computer with some grunt under the bonnet, so try to avoid it where possible.

It can take a little while to get everything up and running, but once your media server is running smoothly you can kick back and enjoy your home entertainment library from every corner of your home.