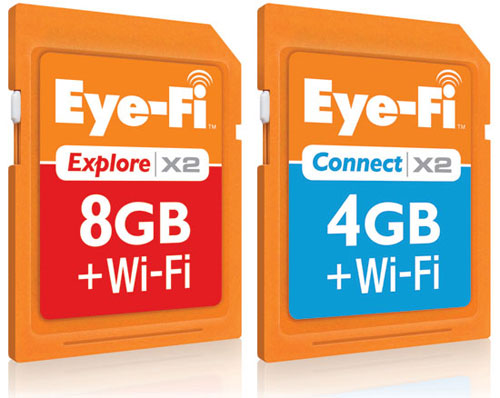 $59.99 is quite a bit to pay for only a 4GB memory card — let alone the $119.99 that the 8GB Pro X2 card costs — so why spend that much? Partly that comes down to the speed; the Connect X2 is a Class 6 SDHC card, meaning it’s capable of a minimum transfer rate of 6MB/s; many of the cheaper cards you’ll find will be class 2 or class 4, meaning they’ll transfer photos off at a much slower rate. Still, that’s not the Connect X2’s claim to fame; that comes from the fact that the Connect X2 is a Wi-Fi enabled SDHC card.

There’s a number of cameras with inbuilt Wi-Fi capabilities, but it’s far from commonplace, and some of the cameras that do have it are no great shakes in the quality department. The X2 sidesteps that problem by adding Wi-Fi capability to any camera able to support the card’s functionality; Eye-Fi maintains a compatibility list here — support.eye.fi/cameras/ — which should give you a good idea if your snapper of choice supports it.

The setup for the Eye-Fi card is quite simple; the card itself contains installation software for PC and Mac, which you run when first plugging the card in. If your desktop or laptop of choice doesn’t have an inbuilt card reader that’s no worry, as it comes with a USB card reader. One word of advice here, though; be careful using the card reader with an external USB hub; in my testing that didn’t pick up that the card was actually inserted, and there’s a support note on the Eye-Fi site that suggests that’s a common problem. If you use the inbuilt USB ports directly on your machine, it sidesteps that problem, and in any case, that kind of reader connection should only be a one-time thing. Part of the setup process involves choosing where you want your photos to end up. You can choose the most popular online storage sites — Flickr or Picasa amongst them — as well as direct to an iOS or Android Smartphone or laptop or desktop. 4GB might not seem like a lot of storage, but it supports an optional “endless” mode that’ll clear old files you’ve already transferred to make space for new ones, making it theoretically last as long as the battery on your camera does when you’re out and about shooting.

Transfer speed is somewhat dependent on the speed of your Wi-Fi network, but in my own tests it’s pretty quick and exceptionally painless; rather than having to remember if you’ve copied photos off the card, you just leave the camera on in range of the same Wi-Fi network, and it’ll handle the rest.

The price aside, the other downside if you’re serious about your photography is that the X2 Connect product doesn’t allow you to wirelessly transfer RAW files; for that you’d have to step up to the $119.95 X2 Pro product. While it’s capable with JPG and video files, the larger size of most video files means it can be a slow transfer, even though it is cordless and requires no user intervention beyond being in a configured Wi-Fi zone. The Eye-Fi’s not for absolutely everybody, but it is massively convenient if you’re a heavy shooter and don’t want to carry around multiple cables and readers with you where ever you go.