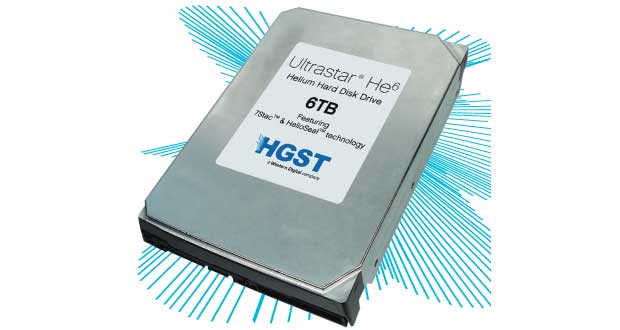 A lot of the hype around storage these days focuses on Solid State Drives (SSDs) and their generally lower power consumption and higher read speeds compared to traditional mechanical hard drives. SSDs are typically more expensive on a per-megabyte basis, but those costs have been steadily tumbling down over recent years.

Mechanical drives — that is, the more traditional, slightly heavier drives that use an actual read head that moves across a spinning disk to read ones and zeroes that your computer then turns into whatever it is you’re doing at the time — aren’t giving up without a fight, however. Western Digital recently announced its Ultrastar He6 hard drive range, intended at first for enterprise users — think big data storage arrays, everything called “the cloud” and you’re thinking in the right kind of spaces for now.

For mechanical hard drives, however, the Ultrastar He6 hard drives are just that little bit different. Mechanical drives still rely on read heads moving over physical spinning disks, but normally that’s done through standard air, even though the drives themselves are sealed. The Ultrastar He6 drives, however, are completely sealed, and that’s because the gaps between the heads, platters and other moving bits aren’t filled with air, but helium.

The intent here isn’t for a legion of IT workers with silly squealing voices, or indeed for data centres that can float. Instead, the Ultrastar He6 drives use of Helium is to take advantage of its considerably lower density than air, which means that there’s a lot less friction and turbulence inside the drive heads. Less friction means the heads have less work to do, and that means that the drives themselves consume less power, because they don’t have to work quite so hard. When you’re talking a major data centre with hundreds or thousands of drives, power savings can quickly add up like that.

There’s another benefit to a lower friction drive, too. Because there’s less friction it’s easier to stack individual drive platters more closely together, and this means the drives in question can accommodate more drive platters in the same drive space. The first drive in the series sports an impressive 6TB of storage in the kind of drive space that usually doesn’t exceed 4TB.

It’s not that likely that you’ll be using a helium-filled drive in your desktop PC any time soon, and on the laptop side things have gone almost completely over to SSDs to enable Ultrabook style form factors and lighter carrying weights. Where at a consumer level the benefits of these drives may be seen is in lower operating costs for online services — because if they’re spending less on power and storage space for the same capacity it could be passed on in the form of lower prices — and then in a year or two start heading more towards the consumer space.

Also — and I probably shouldn’t have to point this out, but just in case — it’d be a bad idea to crack one open to fill a party balloon. For a start, it would cost an absolute fortune.