How do you deal with grubby fingerprints on your gadgets? 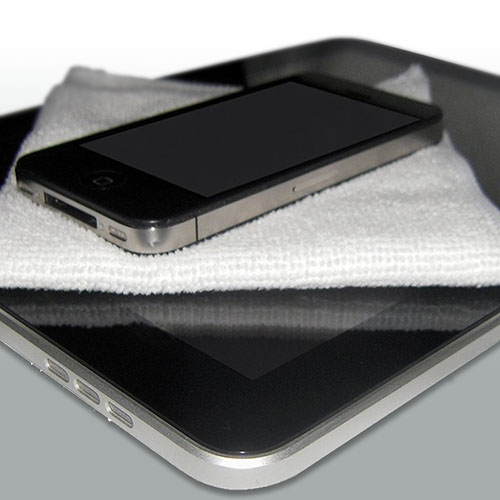 Sticky fingers and shiny gadgets are a bad combination, so what’s the best way to get them looking as good as new?

The downside of the touchscreen revolution is that you’re rubbing your grubby, greasy fingers all over the screen. Unless you’re fastidious with your personal hygiene it doesn’t take long for oily fingerprints, streaks and smudges to build up on your otherwise pristine smartphone, tablet or touchscreen notebook. It’s even worse if you let children play with your gadgets.

When your devices are looking grubby the temptation is to grab any old piece of cloth and rub it across the screen, but proceed with care. Choose something too harsh and you can end up marking or scratching the surface. Rubbing chemicals on the screen can also end badly.

There was a time when I relied on alcohol and fragrance-free baby wipes to clean the screens on my gadgets, although it was difficult to avoid streaks if they were too moist. Now that my kids are out of nappies we don’t have baby wipes lying around the house, so I sometimes use the cloth that came with my reading glasses – although even it struggles at times.

The next step up is a microfibre cloth like the Mobile Cloth, which utilises a special weave designed to pick up grease and grime as well as “98 per cent of bacteria”. To be honest it’s not the kind of thing I’d normally test and it’s hard to get excited about a cloth, but the results are surprisingly good even on smudges I’d given up on.

Put to the test the Mobile Cloth does a fine job of cutting through fingerprints and grime that my other efforts only smeared. It also does a better job of cleaning my reading glasses than the cloth the optometrist included with the case.

You need to push firmly to deal with stubborn smudges, but a few drops of cold water can help here. With a little bit of effort the cloth removed years of built-up grime from the screen of an eight year-old notebook – bringing it up cleaner than I ever thought it could be. Next thing I knew I was walking around the house looking for things to clean, I even tackled a few spots on the television screen that I’ve previously been afraid to touch. If the cloth gets too grubby you can rinse it or throw it in the wash, although you want to avoid using harsh chemicals.

As for claims that it removes 98 per cent of bacteria, that’s obviously a bit difficult for me to test. Keep in mind that the cloth only “removes” them, it doesn’t kill them because there are no chemicals involved. So what you’re actually left with is a cloth covered in bacteria, that which might end up wiping onto the next device you try to clean.

Considering that everything around us is covered in more bacteria than we care to think about, I’m not too worried about whether or not the cloth is removing or just redistributing these little critters. But when it comes to grimy fingerprints, microfibre cloths are clearly the way to go.