How Many Screens Is Too Many? 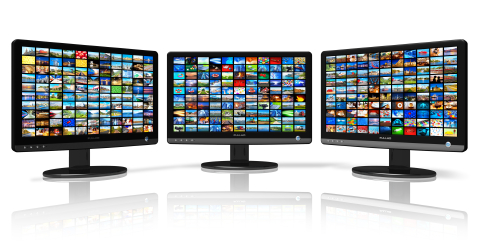 I can remember my first steps with computing rather well; a single vibrantly green display screen that held me mystified. This, I felt sure, was the future, and it seemed like everyone agreed. That was a fairly long time ago, though, and the one thing that I wouldn’t have predicted at that point was that the day would come when a single screen would scarcely be enough to hold my attention.

At any given time, I’ve typically got a large desktop display in front of me, with a smaller secondary monitor to the side. On the other side of the larger monitor there’s typically a tablet — sometimes more than one — and the screen on my smartphone is never that far away. Sometimes they’re for productivity purposes, and sometimes rather markedly not so.

While as a technology writer I’ve perhaps got a little more exposure to this kind of thing than some people, it turns out that what I do is rapidly becoming the norm. Research from Google into how people use multi-screened devices was recently released (navigating the new multi-screen world), discussing how people use multiple devices to complete tasks. Google’s research broke the usage up into two modes; sequential and simultaneous. I’m guilty of both.

Sequential use, as the name suggests, is where you start a piece of work on one device, and transfer to another. With tools like Dropbox and Evernote, I’ve certainly started writing on one device before having left my office, and then done light work on it via tablet or smartphone, before finishing it off on a laptop when I’m out at a work site. But this isn’t much of a rarity; Google’s research suggested that 90 per cent of people move between devices to accomplish a goal.

It’s slightly less common to use devices simultaneously, and Google’s research suggests it’s more a factor of relaxation time; having a tablet on your lap to keep an eye on your Twitter feed while watching a TV program, or perhaps to play a game during a boring ad break. 77 per cent of those Google surveyed were simultaneous multi-screen users.

Google’s focus for the research is into how it can use it to sell more advertising; that’s not surprising, given Google (despite its many products) is still fundamentally an advertising company. But what does it mean for you or me? I’m not surprised that the model for switching between devices is a popular one, because it’s ultimately a very productive one. That doesn’t mean, however, that all simultaneous usage is non-productive usage, either; I’ve been known to flick less essential work — an email feed, or an updating web page that I need to keep an eye on from time to time — to a secondary screen while I work. I’m simultaneously using both, but it’s adding to my productivity rather than splitting it, because the less critical work doesn’t involve switching windows to check details; all I need to do is avert my gaze for a second or two.