How much more are we paying for tech in Australia? 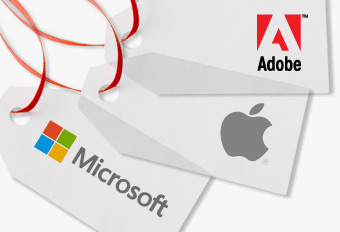 The price we pay for IT goods — both hardware and software — in Australia is an incredibly contentious issue. So much so that as I write this, there’s a government pricing inquiry looking into the exact differences in IT pricing, although whether it’ll have any teeth to get results is, in itself an interesting point.

Price hikes on Australians are often referred to as the “Apple Tax”, based on the idea that the fruit-themed computer company used to charge significant margins for computers and mobile devices compared to the price it charged in the United States. That’s a margin that’s shrunk in recent years as far as I could tell, but just prior to the inquiry pulling Apple up in front of it, one blogger did the raw sums to work out what the precise price differences were.

Graham Spencer from Macstories sorted the numbers and found that on the hardware side, the picture was reasonably consistent; once you remove GST there’s only marginal difference — 6.6% on the price of a Mac, 3.6% on an iPad and so on. Given Australia’s divergent geography and smaller market size, that’s not too onerous a difference — and certainly way below the kinds of price differences I’ve seen other hardware brands put on laptops and tablets in the past. There was no denying the “Apple Tax” in the past, because we used to pay much, much more for the same hardware here, but given the costs of doing business in Australia, it’s not unreasonable now.

It’s not quite so rosy on the software side, however, especially when it comes to digital music and movies, where the difference can be as great as 61.4% (music), 33.5% (movies) and 25.9% (TV). Those are files that are delivered digitally, so there’s very little in the way of shipping or middleman costs there. Apple’s excuse, as put to the pricing inquiry was that a lot of that content is out of their hands, as they’ve got to negotiate deals with record, movie and tv companies, the same as any other provider. Given that if you look at the prices on similar services they’re mostly identical, I tend to believe Apple, but that still doesn’t make it a pleasant pill to swallow. Apple’s not even the worst in this category; an often-repeated idea is that it’s cheaper to buy a return economy ticket to LA, jump off the plane and go buy a copy of Adobe’s Creative Suite and fly back than it is to buy a boxed copy right here in Australia — although I’m not entirely sure that there are software shops selling the full suite package at Los Angeles Airport, so you might have to factor in a taxi fare there as well. Still, that’s a ludicrous price difference that Adobe tries to justify under the guise of localisation. That one I flat out don’t believe; if you fire up Photoshop, for example, it’s not like it talks about different colours — they’re colors, the same as they would be in a US copy.

That does bring up one avenue for getting software and hardware a little cheaper, and that’s direct importing, sometimes called grey importing. It’s perfectly legal to do, as long as you stay on the right side of any tax obligations, depending on the costs of what you’re ordering. The government inquiry may come to the conclusion that we’re paying too much but be somewhat hamstrung in what they can do about it, but at an individual level, there’s an easy way, and it involves voting with the dollars in your wallet.