How smart is Motorola’s Moto 360 smartwatch? 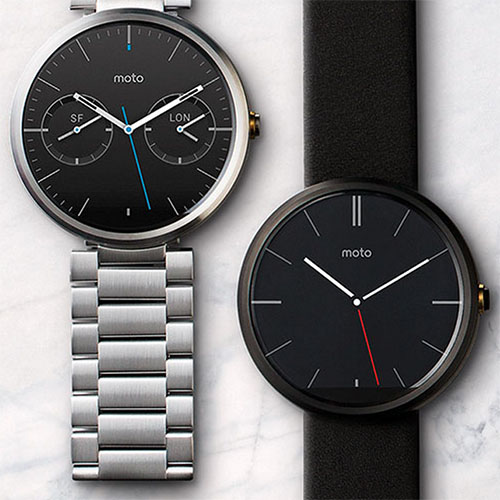 With a Moto 360 on your wrist you spend less time reaching for the smartphone in your pocket, but smartwatches still have a lot to learn.

The current generation of Android smartwatches still rely on an Android smartphone in your pocket, although some are more dependent on your phone than others. The Motorola’s Moto 360 smartwatch runs Google’s Android Wear software, but it’s reliant on a nearby Android 4.3 or greater smartphone for internet access and most notifications. Meanwhile Samsung’s Gear S smartwatch has its own built-in SIM card. The Gear S can still interact with your smartphone – which has to be Samsung Android – but it remains much more useful when they’re apart.

The Moto 360’s big selling point is that it has a round face, so it looks more than a traditional wristwatch and less like you’ve just strapped a tiny smartphone to your wrist. If you’re fashion conscious then you might favour Motorola’s or LG’s round smartwatches over the chunky rectangular alternatives from the likes of Samsung and Sony. Not everyone wants their smartwatch to stand out from across the room.

The trade-off for the Moto 360’s round face is that you can’t fit as much on the screen as you can with something like the hefty Samsung Gear S. The Moto 360 is fine for glancing at short notifications, but as soon as you try to do much more on the screen it hands you back to the Android smartphone in your pocket. Meanwhile the Gear S can run a lot more apps on the phone’s screen, such as Google Maps when you need to find your way.

The Moto 360’s biggest shortcoming is that it lacks a built-in speaker, although some people might see this as a blessing rather than a curse. When the Moto 360 wants to get your attention it discreetly vibrates rather than making a loud noise – one quick vibration for an incoming message or notification, or repeated vibrations for an incoming call. This is handy when you’re in a work meeting or social occasion and don’t want to be seen reaching for your phone.

The downside is that you can’t make or answer calls Dick Tracy-style via the Moto 360 on your wrist. You can accept or reject incoming calls using the watch’s touchscreen, and initiate outgoing calls, but when you want to talk to someone you either need to grab your phone from your pocket or use a wireless Bluetooth earpiece connected to your phone.

Another frustration with the Moto 360 is that it puts the watchface to sleep to save power. To see the time you need to lift your arm and turn your wrist. This quickly becomes annoying when you just want to glance at the time. There’s an ambient mode that leaves the screen dimly lit, but it’s difficult to see – especially due to the amount of glare that comes off the glass.

Meanwhile Samsung’s Gear S constantly displays the time, as do eInk-style smartwatches like the Pebble. It’s something to keep in mind if you mostly intend to use your smartwatch as a watch.

The Moto 360 is a handy gadget if it stops you reaching for your smartphone every few minutes just to check notifications, but it’s still early days for smartwatches and you should certainly weigh up your options before rushing it.