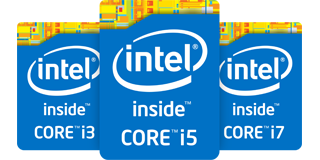 Intel recently took the wraps off the fourth generation of its Core i-series processors, a family previously known under the code name of “Haswell”. You won’t see Haswell anywhere on the packaging or labelling (or indeed, anywhere beyond tech enthusiasts writing about them), but each generation of Intel processors has its own naming convention. If you care, Haswell is replacing Ivy Bridge, the third generation series that’s now technically last generation. A little more on that later.

So if they’re not called Haswell, how can you pick them? It’s all in the numbers. Intel uses CPU numbers not to measure clock speed — which was the easy way to pick processor performance way back when only the CPU grunt mattered that way — but to differentiate features between desktop and mobile CPUs, and those with more or fewer advanced features. The one constant you’ll find in an Core i3 (entry level), Core i5 (mid) and Core i7 (high end) CPU is that the first number after the specification will detail its generation. So a Core i5-4200U is a fourth generation Haswell processor, because of the 4, while a Core i5-3437U is a third generation, Ivy Bridge part. As with most technology, while it’s still brand spanking new, you’ll pay a premium for fourth generation processors, and Intel’s rollout scheme rather emphasises that, with premium processors first off the line, followed later in the year by more mid-range, affordable CPUs.

As you’d expect from a newer processor, Haswell chips are meant to be more powerful as well as more power efficient (for laptops and tablets), with improved onboard graphics capabilities to boot. It’s pretty clear that Intel’s picking tablets and laptops as the future, because while the new quad-core desktop Haswell parts certainly aren’t slouches, most of the real headline features are of most benefit to mobile users. Intel’s also revised the Ultrabook standard to require much longer idle battery life — up to nine hours idling versus a minimum five hours for Ivy Bridge Ultrabooks — and a requirement for a standby time of an impressive seven days. We’re yet to see Haswell-based Ultrabooks in the marketplace, but they should appear very shortly, along with a host of other systems utilising the fourth generation processor family.

So does this mean you should hold off on buying a laptop or desktop until it has a fourth generation Core product in it? Not entirely. Leaving competitor AMD aside for the moment, even if you were dedicated to an Intel-only solution, it’s worth bearing in mind that the systems on store shelves right now with third generation processors in them are still quite powerful, and moreover, there’s a strong impetus for them to be shifted off store shelves as the new fourth generation systems come along.

As such, it should be possible to find bargains in slightly older generation chips, simply because the new stuff is coming, and if you’re working to a tight budget, that could mean a slightly better system (with slightly older processor) than you might get with a “new” fourth generation CPU nestled in its innards. That’s especially true if you’re still keen on a desktop as your primary computer, because the majority of the really show-stopping improvements lie on the mobile side.