Is Foxtel’s Presto the magical movie service you’re looking for? 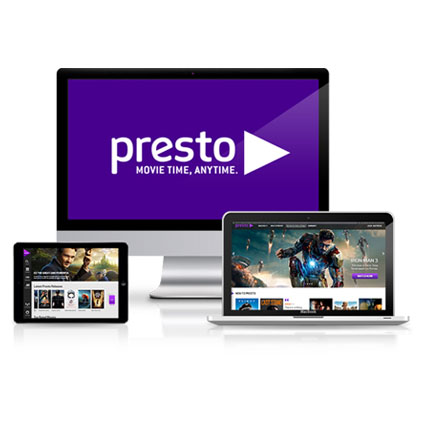 Would an all-you-can-eat movie library do the trick in your home?

There’s a major shift in tech-savvy Australian homes as we move away from the idea of “owning” content such as music, movies and TV shows. Instead we’re embracing subscription services which ask us to pay a few dollars every month for unlimited access to a massive library of content.

If you’re a keen user then a subscription service certainly works out much cheaper than buying or renting every movie you watch and every album you listen to. The downside is that you don’t actually own any of it, so if you stop paying you’re left with nothing. You’ll need to crunch the numbers and decide for yourself whether an all-you-can-eat subscription service is a good long-term deal for your home.

Foxtel’s Presto is Australia’s latest subscription service, offering unlimited online access to around 1000 movies for $19.99 per month. That’s twice as expensive as local rival Quickflix, but in return you get access to more recent movies in the all-you-can-eat library. Both Presto and Quickflix also offer brand new releases as $5.99 overnight rentals, although Presto’s rental library is pretty disappointing at this stage.

Presto’s strength is that it taps into the Foxtel Premiere movies channel to offer all-you-can-eat access to movies around six to nine months after they appear in the cinemas. As a result Presto offers a range of recent titles such as Star Trek: Into Darkness, Oblivion, Iron Man 3 and Jack Reacher – movies which are either overnight rentals on Quickflix or missing completely, unless you want Quickflix to post them out to you on DVD.

The downside is that, unlike Quickflix, Presto’s back catalogue won’t grow over time. Presto only offers movies currently screening on Foxtel’s seven movie channels, so when they drop off the current lineup they also drop off Presto. This means there’s always something new to watch on Presto, but you can’t expect to find your favourite classic movies. If you’re chasing new movies then Presto looks more attractive, but if you’re hoping to revisit the classics then Quickflix might be the better choice.

One of Presto’s shortcomings is that it doesn’t offer TV shows. If you’re looking to catch up on popular shows such as The Sopranos and The Wire then you might be better off with Quickflix. That said, Quickflix’s TV library isn’t as extensive as you might hope. Many new release TV shows are still pay-per-episode rather than part of the all-you-can-eat library.

Unfortunately Quickflix doesn’t have the right to offer Season 4 of Game of Thrones until mid-June when Foxtel has finished screening every episode. Of course you won’t get Game of Thrones on Presto either, or any other television show. If you want to watch Game of Thrones in Australia week-by-week this season you either need to sign up for a home Foxtel service or subscribe to the Foxtel Play streaming video service.

Presto’s other major shortcoming is that it’s only compatible with a handful of devices; Macs, PCs and iPads with Android tablets to come. There’s no way to watch Presto movies on your television, because it’s not built into Smart TVs, Blu-ray players, Personal Video Recorders and game consoles the way Quickflix is. Foxtel has even disabled AirPlay video streaming from the Presto iPad app.

When you’re paying extra to watch the latest movies, it’s frustrating that Presto won’t let you watch them on the biggest screen in your house. Support for additional devices might come with time, but until then you’ll need to be content with watching movies on your computers and tablets. If you can live with this restriction, and you’ll watch more than one movie every week, then Presto might be a good fit for you.