Is it worth getting excited about “Ultra HD” TV? 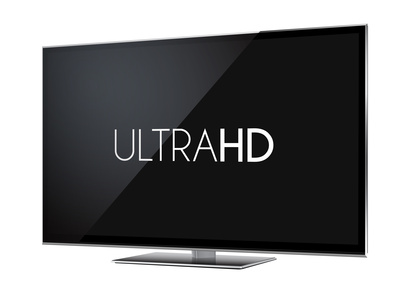 Every few years it seems they come out with some new innovation to convince us that it’s time to buy a new television, even if your old television is still going strong. A few years ago the Next Big Thing was 3D TV, designed to coincide with the 3D revival at the cinemas. James Cameron’s Avatar was impressive, but since then 3D offerings have been rather hit and miss.

These days the Next Big Thing in televisions is Ultra HD, offering four times the resolution of a Full HD Blu-ray movie. An Ultra HD TV can still upscale Blu-ray, DVD and digital TV to fill the screen, which is a good thing because there’s nothing yet to watch in Ultra HD. Hollywood hasn’t even decided how it’s going to deliver Ultra HD movies to your lounge room. Weighing in at around 100 gigabytes, an Ultra HD movie is too big to cram on a Blu-ray disc. Meanwhile Ultra HD television broadcasts are unlikely to come along because they demand too much bandwidth. Australian television networks seem to have lost interest in Full HD broadcasting, so they’re unlikely to embrace Ultra HD any time soon.

Despite the lack of content you’ll already find Ultra HD televisions on the shelves, with early adopters paying top dollar for the privilege of owning extra pixels which they can’t yet put to good use. In the United States, Sony is launching a fledgling Ultra HD online movie rental service with a few dozen titles. Netflix is also trialling Ultra HD movie streaming. Of course there’s no word as to when such services might make it to Australia, although they’re not likely to rush now that the National Broadband Network is being scaled back. The new generation of games consoles from Sony and Microsoft might help usher in the Ultra HD era, but you’ll still need a way to get that content to your lounge room.

People tend to replace their televisions every seven or eight years, so it’s possible that if you bought a new Full HD television today you might regret it by 2021. But prices drop so quickly that it still seems a mistake to jump into Ultra HD today unless you’ve got deep pockets. When you crunch the numbers, it makes sense to hold off.

Right now Ultra HD TVs start at just under $5000, or you can buy the Full HD equivalent for around $2000. Rather than spend $5000 or more on a first-generation Ultra HD television today, you could grab yourself a $2000 Full HD television to tide you over for the next two or three years until there’s something worth watching in Ultra HD. By then you’ll probably find a $3000 Ultra HD TV which looks much better than today’s $5000 first-generation models. The improved picture quality of OLED, rather than traditional LED, will also become more affordable.

By delaying your Ultra HD upgrade you could still spend the same amount of money over seven years, but at the end have a much better television to show for it. If your money is burning a hole in your pocket then feel free to jump into Ultra HD today, but right now there’s little benefit to being an early adopter.