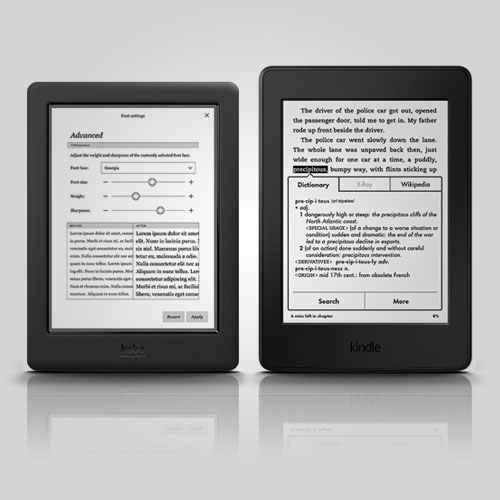 If you’re limited in shelf space, it can make good sense to invest in eBooks, especially if you’re a heavy reader. They’re eminently portable and can be read on just about any device with a screen, but there’s undeniably still something about reading on a display that tries to mimic paper as closely as possible. Most people’s first interactions with eBooks was probably with a unit utilising an e-ink screen, and while there’s no shortage of other devices that can read eBooks, there’s only really a couple of serious players in the e-ink e-reader market.

From a specifications point of view, there’s not too much to pick the two readers apart. Both tout as their headline feature a 300dpi e-ink screen. Like most other e-ink screens they’re still greyscale devices, which means any images are monochrome only, but at that kind of definition, the differences between an e-ink screen and an actual page are rather moot.

Text on both the Kindle Paperwhite and Kobo Glo HD is incredibly sharp and easy on the eyes. That’s often touted as a specific advantage of using e-ink devices over the LCD screens found in most tablets and smartphones, because they’re less wearing on your eyes over a lengthy reading session. Between the Paperwhite and the Glo HD it was a close run race as to which was more eminently comfortable; I rather liked the Paperwhite’s font handling and automatic hyphenation, but the backlight on the Glo HD I’ve tested was a little more even across the entire display. The Glo HD is also ever so slightly lighter at 180g to the Paperwhite’s 205g, although that’s a distinction you’re only going to ever notice if you’re holding them side by side. Neither is particularly hefty, although the 3G-enabled Paperwhite — enabled to allow you to buy books from Amazon’s storefront no matter where you are — is a little heavier again.

The Kobo Glo HD has an RRP of $179, while the Paperwhite retails for $199, or $249 in its 3G variant. Unless you’re both very disorganised and love reading a lot, there’s not too much of an argument for the 3G version, as it’s pretty easy to load up books from your home Wi-Fi (or even a public hotspot, if you must) onto a Kindle to keep you busy.

Buying either e-ink reader means buying into either Amazon’s or Kobo’s eBook stores, and that’s arguably a more significant decision than choosing either e-reader, because any books you do “buy” from them are limited to their apps and services. Thankfully they’re fairly widely spread in terms of secondary readers for desktops, tablets and smartphones, but this brings the other aspect of eBooks to the fore. When you “buy” an eBook, what you’re actually buying is a licence to read it. The terms of that licence are hidden in the EULA and can vary book by book. I’ve got some tomes that were bought years ago for previous e-readers that have been downloaded a few times to different tablets that Amazon won’t, for example, allow me to download to the Paperwhite, because of licensing restrictions. As such, I tend to view eBooks as a “rental” proposition in any case.