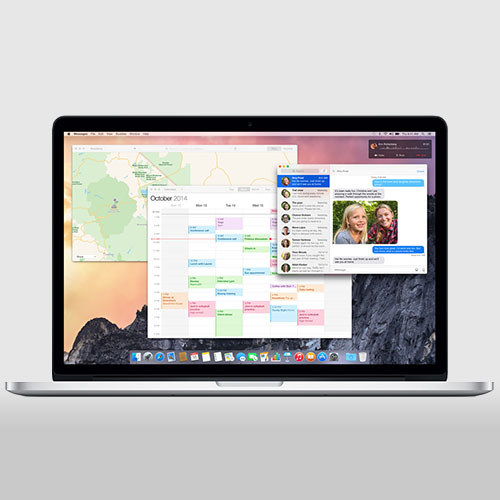 Apple recently updated its laptop lines with new models of the MacBook Air, MacBook Pro and the revitalisation of the MacBook line in an ultra-slim, somewhat pricey chassis that, like iPads and iPhones, will come in a variety of colours.

Still, it’s the MacBook Pro that sits at the top of the MacBook heap if you’re serious about productivity, because that’s where Apple offers the highest specification processors, storage and memory combinations. You do pay a little more for a comparable MacBook, partly because they are genuinely pretty well built, but also because Apple does sell itself as a “premium” brand, and like buying other “premium” brands, that doesn’t come cheap.

I’ve spent the last two weeks testing out one of the new range of MacBook Pros; in my case the 13″, 2.7Ghz, 8GB RAM, 256GB SSD variant that’ll set you back $2,099 at the time of writing. Ostensibly you could sit the new MacBook Pro next to last year’s model and you’d have a hard time picking the difference between them at a visual level, and you might not even pick the one big difference that the new MacBook Pro’s picked up from its tinier MacBook cousin.

The secret is in the touchpad, which at first touch feels much like any other MacBook Pro — or any other — touchpad. Except that it isn’t. Click down on the MacBook Pro touchpad, and your finger won’t move an inch, even though your finger will feel like it’s clicked. That’s because it features a haptic feeback engine that mimics the “feel” of a click anywhere on the touchpad, rather than having a moving “button” area that you click down on.

Lest you think that this is simple mechanical trickery for the sake of it, the touchpad — Apple calls it “Force Touch” — gains several significant advantages by this approach. Classic touchpads manage mouse clicks by resting on a pivot point, which means that the top of the trackpad is fine for mousing gestures, but useless to actually click on, because the pivot is tilted towards the base of the trackpad. As such, you can tap as much as you like at the top, but you won’t get any clicking traction. The force touch trackpad does away with that, because it’ll follow your finger and allow you tap absolutely anywhere you like.

In addition, because it offers levels of pressure measurement, along with the multi-finger gestures that have been part of Mac OS for a while now, it also offers a tertiary mouse-click option within selected applications. For now this is limited to Apple’s own inbuilt apps, offering things like dictionary selections within the Safari browser or fast forwarding in Quicktime movies, but there’s significant scope for other applications from external developers.

The new MacBook Pros use Intel’s fifth generation Core processors. They’re the “Broadwell” family, if you’re into Intel’s internal codenames, and like previous MacBook Pros, and any other laptop using them, they’re currently the best Intel can offer, leading to a laptop that’s very quick in operation. My day to day machine is a gently ageing iMac, and the MacBook Pro runs absolute rings around it for any performance task I could throw at it. At 1.58kg, it’s a little on the hefty side if you’re more used to lugging around an ultrabook or tablet, but that heft allows it to pack in a decent quantity of batteries, with my review model running a very handy 10 hours in a video playback exhaustion test.

If you’re a mobile power worker, it’s a very solid buy indeed, although it’s pricing range, excluding the entry level model does pose a bit of a quandary if you’re on the Mac side of the operating systems fence. The Pros at the MacBooks to buy for performance, but the new MacBooks are very alluring machines with exceptionally light carrying weight and the same Force Touch trackpads and retina screens. Somewhere in the middle sit the MacBook Air models which still don’t have high resolution (“Retina”, in AppleSpeak) display screens but more ports than the MacBooks, which as I’ve discussed recently only has a single USB-C type port.

The other challenge, and this is true across all MacBook types, is that they’re effectively impossible to upgrade. That’s often the case with laptops for matters such as processors or graphics cards, but the entirely sealed nature of the MacBook, MacBook Air and MacBook Pro means that you can’t even upgrade, or pay Apple to upgrade, the hard drive or memory. As such, if you’re still keen, budget for your needs, because they’re laptops that are resolutely fixed as they’re built.

Apple hasn’t changed a huge amount with this year’s MacBook iteration, and in some respects it didn’t need to. It’s faster, and that’s to be expected, and the Force Touch trackpad works well. Sometimes you don’t need to make radical changes to make a product better.