Meerkat and Periscope make us all TV journalists 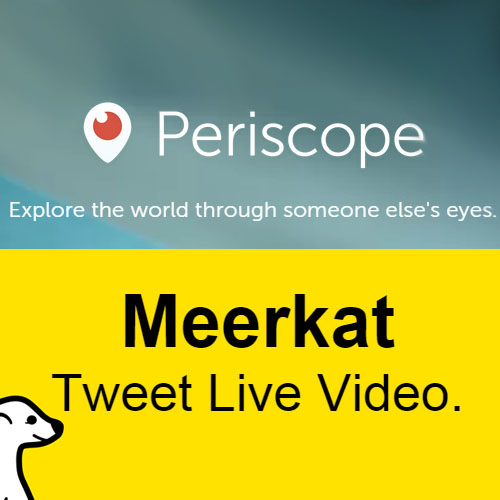 The image of a TV news reporter is one that you’re probably quite familiar with. It’s almost a cliche; someone at the scene of something newsworthy, shouting into a microphone either for a direct news report or a live cross. Live TV news has put us directly in the scene of major disasters, helped to keep us informed, intermittently bored us when they’ve been filling time waiting for something to happen and provided endless bloopers you can look up on YouTube to fill time. Being news, not all the bloopers are entirely family-friendly, but that’s the essence of live broadcasting, because anything can happen, and Murphy’s well-known law often intervenes.

But what if you could be a one-person TV news reporter yourself?

It’s not that fanciful an idea when you think about what goes into providing a live stream of anything newsworthy, because the odds are very high that you’ve got everything you need in your pocket right now. The power of modern smartphones and high speed mobile networks means that, while you may not have the polish of a seasoned news reporter, there’s little stopping you from streaming whatever you’re doing to the whole world if the mood suits you.

Which is fine, but the other factor that most news bulletins have is an inbuilt audience. Viewers are accustomed to tuning into news at a specific time, or switching to a dedicated news channel, or even reading a news-centric website suited around whatever their interests might be.

That’s where the power of social media and two relatively new apps come into play, because they allow you to not only broadcast to as wide an audience as you’d like, but also to announce your broadcast to your social network, making it easy to build or grow an audience. These aren’t entirely new concepts again, but the recent launch of Meerkat and Twitter Periscope, both iOS apps only at the time of writing seems to have captured the popular imagination.

Both apps work in essentially the same way, built around the Twitter social network. Periscope is the slight newcomer, but as the name might suggest, it’s an actual product of Twitter itself, whereas Meerkat works from an external company. Both allow you to link in an existing Twitter account, announce a broadcast and then start broadcasting whatever’s in front of your iOS device at the time, whether it’s newsworthy content of major importance, or just something interesting happening nearby. From within either app you can see who’s actually watching your live stream, and even watch their Twitter-based interactions around your stream. Meerkat allows you to save your livestream when you’re done to your iOS device, whereas Twitter Periscope offers either device based saves or online saves, so others can watch concluded streams after the event. There’s some obvious benefits in either approach depending on whether you want to share to a wide audience that may rewatch and retweet your stream, or keep your stream private apart from those who “tuned in” to watch it live.

Will self-produced video broadcasts become the new selfies? I have my doubts. For a start, to get a decent video stream up and running you need a decent upstream rate, and for a lot of Australians that’s just not a factor at all. You can broadcast from mobile networks, and that can work quite well because most of those feature quite high upstream potential over 4G LTE, but then you hit the issue of cost prohibitive mobile data costs. Still, if you do find yourself (safely) near the next big news story, the potential is only an app away.