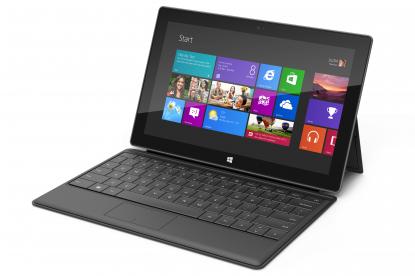 If you’ll forgive the pun, on the Surface, Microsoft’s Surface RT appears to be a bit of a bargain. At $559 for the base 32GB model, or $679 with a black touch cover, or if you prefer a little more storage and a more robust keyboard, $789 with 64GB, it’s got the appearance of a full capable Windows 8 laptop with the form factor of a tablet. What’s not to like?

There is in fact quite a lot to like. The Surface RT’s 10.6 inch display is crisp and clear, and Microsoft’s innovative “touch” cover includes a soft-touch keyboard that responds well for short responses; more adept typists would be better served with the slightly more expensive type cover, which is more like a standard notebook keyboard. Windows 8, as we’ve written before, is an operating system built around the touch motif, so having a unit with touch as its central premise should work very well; once you wrap your head around the “modern” interface (that’s Microsoft’s marketing phrase for it) it’s possible to access data quite swiftly within the Surface RT’s limited array of applications.

A key selling point for the Surface RT has to be that it ships with a version of Microsoft Office 2013. That’s a big plus for a tablet; while there are apps for Android and iOS tablets that will save to Word and Excel, they’re not actually Office, and this is — mostly. There’s no support for Macros, Visual Basic or any third party add-ons, although that last bit is rather understandable, because while the Surface RT might look like it’s running Windows 8, it’s actually not doing so. What the Surface RT runs on is what’s called Windows RT.

So, I hear you cry, what’s Windows RT? It’s a special version of Windows 8 that Microsoft’s built to run on tablets using underlying ARM architecture, instead of the x86 (think Intel, AMD) platform that Windows has run on previously. ARM should be more power efficient — and in my own tests, the Surface RT does stand up well to a day’s robust usage — but it lacks backwards compatibility with existing versions of Windows. What that means is that there’s only one way to get software for the Surface RT, and that’s via Microsoft’s own Windows Store. At launch, the range of available applications is rather meagre; hopefully that’ll improve over time.

There are other issues to contend with as well. The Surface Tablet itself has a nifty kickstand built in, so you can prop it up with a satisfying click when on a desk or bench. That works very well, but the same isn’t true when trying to balance the Surface RT on your lap, especially with an attached touch or type cover. It’s more than a little bit on the wobbly side. The click on keyboards work well, and Microsoft does sell the touch cover in multiple covers, but if you want anything other than black, you’ll have to buy it separately; the only colour you can get as a pack-in is the black one.

What that adds up to is a rather mixed offering. There’s no doubt that under specific circumstances, the Surface RT can be more productive than competing tablets, especially if you’re a heavy Microsoft Office user. But that usage case is a little limited, and Microsoft itself is readying the Surface Pro, a full Intel (and thus full Windows 8) tablet for release in the new year. I’d suggest waiting at least until the Surface Pro emerges before diving in.