Network drives: the beating heart of the small office 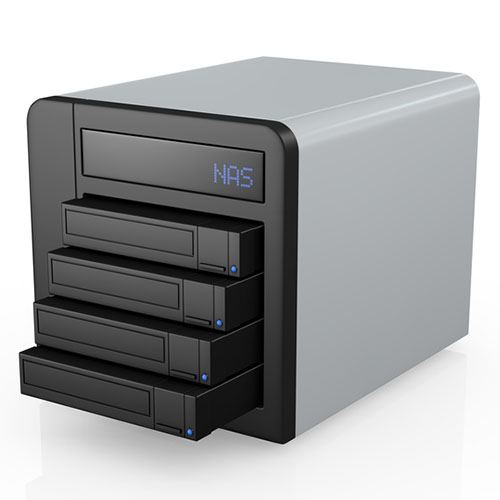 The majority of Australian businesses are small businesses, but that doesn’t mean they have to skimp on infrastructure. A network attached storage (NAS) drive makes a great central storage/backup point for your important files, accessible from all the devices around your office and even remotely over the internet.

But not all NAS drives are created equal.

Entry-level consumer NAS drives are little more than a hard drive with an ethernet port bolted on the back. They might be enough to satisfy your average home user, but small businesses should shop around in search of business-grade features and performance.

The first step in separating the wheat from the chaff is to look under the bonnet at the processor and RAM. You might think of a NAS as simply a glorified hard drive, but a high-end NAS is basically a tiny computer. If a NAS doesn’t list its processor and RAM in the spec sheet then you can safely assume it’s nothing to get excited about.

Don’t underestimate the importance of grunt in a SOHO-grade NAS. It’s likely to feature a dual-core processor – maybe a Marvel Armada or Marvel Kirkwood chip, or perhaps even a step up to an Intel Atom chip. Alongside this you’d expect at least 512MB of RAM if not 1GB.

This extra grunt makes itself felt when it comes to data transfer speeds as you backup your computers and shuffle files around the office. Transfer speeds aren’t just determined by the condition of your office network, they’re also at the mercy of how quickly your NAS can process files.

If backups to your network drive are slow, a lack of grunt may be the bottleneck. Slow network backups can bog down your desktop computers, plus you can be left twiddling your thumbs while you wait for data transfers to finish. If you’re going to use your NAS as a file server then grunt becomes even more critical, to ensure work doesn’t grind to a halt every time you need to access a file across the office network.

A powerful NAS doesn’t just deliver a raw speed boost; it also has the grunt to support a wide range of extra applications. A built-in download client lets you schedule file transfers, automatically downloading files after-hours even when all your computers are shut down for the night. This way you can hit the ground running when you sit down at your desk first thing in the morning.

Running an FTP server on your NAS even lets clients upload files directly to your office so they’re ready and waiting when you need them.

The extra processing power can also be used to run in-house servers on the NAS, such as WordPress, Joomla, Drupal, SugarCRM, Media Wiki and phpBB. Hosting your internal blogs, wikis, bulletin boards and customer relationship management systems on your NAS rather than in the cloud might make sense if you’re only looking to offer internal access.

Of course it’s possible to expose them to the wider internet if you need secure remote access.

Many SOHO-grade NAS drives also offer tight cloud storage integration. This makes it easy to backup the contents of your NAS offsite to services such as Dropbox, Google Drive and Amazon S3.

Backing up your computers to the NAS, and then the NAS to the cloud, might be simpler than running both local and cloud-based backup software on every computer in the office.

Far more than a place to dump your backups, your network drive can be the glue that ties your office together.