Office for free on iPad and Android: What’s the catch? 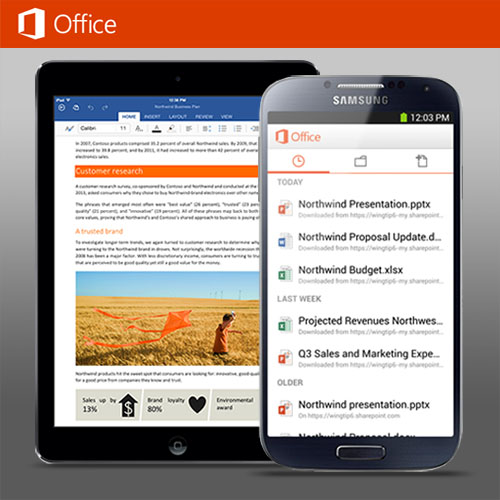 There are few things that are absolutely certain in computing.

There’s Moore’s Law, which states that the number of transistors in a dense integrated circuit doubles approximately every two years — or in slightly less techy language, that over time, the processors that underly all of our computing efforts will become more efficient and in effect “better”, although that’s a measure of “better” that can encompass a number of different characteristics.

Microsoft will always charge top dollar for its Windows and Office software, because it’s a software company, and those two products make up the bulk of its revenues.

Except that Microsoft’s been changing all sorts of things about itself that have strongly differentiated itself away from those software roots, including the way that it sells — or, to put it bluntly, rents — its software. It hasn’t quite come to the point where you rent your Windows software, but the shift from having a copy of its operating system to install on hardware you owned to owning a “licence” for that software tied to rather specific hardware has been part of its strategy since the advent of Windows XP.

Office meanwhile, has been slowly shifting from being a boxed or download product that you buy into a subscription service under the “Office 365” banner. The Office 365 deal is pretty simple. You pay Microsoft a monthly fee — potentially as low as $9.95 per month for personal users — and get full access to the current versions of Office for as long as you’re subscribed. Adobe does a similar kind of thing with its Creative Cloud suite, but that’s more pitched at the serious design crowd, where Microsoft Office is the default standard for all kinds of work, from study to spreadsheets and beyond.

Microsoft recently announced a serious sweetener for its Office 365 subscribers, announcing that as part of the subscription it would offer unlimited online storage space on its OneDrive service for subscribers. Given that competing services such as Dropbox cost around $9.95/month for 1TB of storage, that’s an exceptionally good deal, because you’re getting more storage for your money and the default Office standard as software as well.

That wasn’t the end of Microsoft’s reimagining how we might use Office 365, either. Earlier in the year it released Office apps for the iPad, and while they had some limitations, they were free to download if you wanted only to look at Office documents. Office 365 customers, however, could access full editing and document creation, meaning that for some users an iPad and a Bluetooth keyboard really could replace their laptop for a lot of their functional work. Given how hard Microsoft’s fought to try to grasp some of the tablet market through its Surface line of products, this was a fascinating step — but Microsoft wasn’t done.

More recently, Microsoft decided to make Office for iPad, as well as the newly release iPhone and upcoming Android versions free for simple editing purposes as well, unlocking some of that functionality that was otherwise only available for the paid Office 365 subscribers. It’s not quite “free” office, however. In reality, it’s a ploy often referred to as “freemium” in app development circles, which means that it’s free to a point with strong hooks to encourage you to “upgrade” to full Office 365. So for example if you do have files on OneDrive that you’d like to edit in Office for iOS, you’ll need an Office 365 subscription to do that. Want to track changes in your document the same way you can on the desktop version of Office? Again, that’s a premium feature for Office 365 customers only. Want to customise charts or modify tables in Excel and Word respectively? Premium for Office 365 only again.

For some limited uses, though, Office for iOS/Android could fill all the needs you have in an Office suite with the added benefit of full Office compatibility. That’s Microsoft’s other goal in setting Office “free” (but not quite) — it helps to maintain the Office document formats as the absolute default standard for digital documents worldwide, because even those who won’t pay for Office 365 will be creating documents for Microsoft’s Office platform.