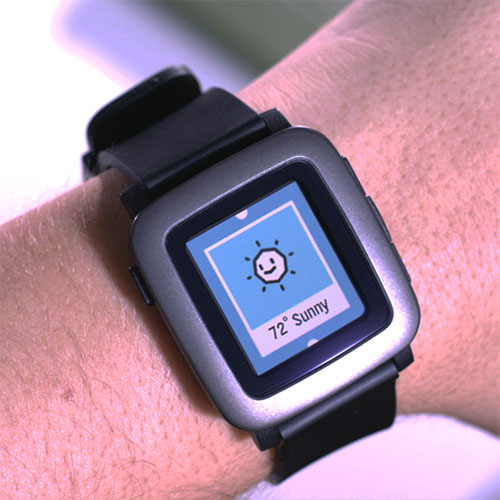 If you’ve followed the smartwatch space over the past couple of years, you will have seen numerous smart timepieces from Samsung, a few offerings from Sony and any number of fitness bands that also include rudimentary timekeeping facilities.

Then there’s Pebble. Pebble was initially conceived as a Kickstarter project to develop a smartwatch that would work across the two major mobile operating systems using a simple e-ink display. The Kickstarter crowd went nuts for it, making it for a long while the most successfully funded project in Kickstarter history. It took Pebble a while to deliver its first smartwatch, because it turns out that there’s more to mass production that simply having an interesting idea, but a few years down the track there’s the original model and the slightly fancier Pebble Steel competing well against the current crop of Smartwatches.

Pebble’s latest offering goes back to the Kickstarter well for the colour screen Pebble Time smarwatch, a gentle evolution of the Pebble concept that still uses e-Ink to maximise battery life. That’s more important than you might think, because a lot of the competing smartwatches can struggle to make it through more than a day, where Pebble’s existing smartwatches can manage four days to a week on a single charge depending on use.

The Pebble Time will also enable limited spoken notifications through an inbuilt microphone, although at launch that’ll have more application for Android users than iOS ones thanks to the rather more locked down nature of iOS itself.

It is, as noted, a gentle evolution of the Pebble model, and that’s something that often happens in technology spaces. While the underlying CPU of your notebook is faster than it was five years ago, in real design terms, there’s not likely to be too many differences. The same is true in smartphones, where all the big vendors are settled into their design ideas, such that a new model iPhone or Samsung Galaxy device tends to look and act a lot like the last one.

The smartwatch space, though is one that’s still in its early evolutionary phases, and that could be a problem for Pebble. As I write this, I’m at Mobile World Congress in Barcelona, and Chinese firm Huawei is due to announce a highly stylish smartwatch that’s already leaked out prior to announcement. LG’s got a similar device waiting in the wings, and there’s the prospect of the upcoming Apple Watch to contend with as well, with Apple apparently due to have a launch event in the US in early March. That means that given the Pebble Time’s shipping estimate of mid-year, more powerful smartwatches might beat it to market.

Then again, Pebble’s still got the battery life argument in its favour. It states that it’s capable of “up to” a week’s battery life. “Up to” figures are always notably rubbery, but even three days is better than the current run of competing higher-powered devices, and until we see some radical changes in the underlying battery technology, there’s always going to be some kind of compromise in devices as small as a smartwatch.