Powerline AV might help deal with your wireless woes 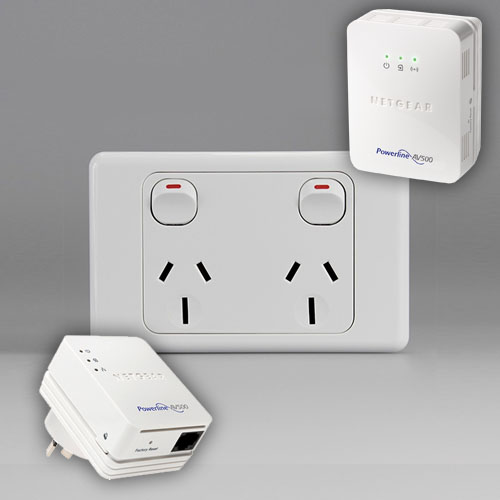 When Wi-Fi won’t cut it and you can’t run Ethernet cables, your electrical wiring offers another way to extend internet access to the furthest reaches of your home.

While we all enjoy the convenience of Wi-Fi, sometimes it’s just not up to the task at hand – especially if your home has Wi-Fi blackspots or is a hotbed of wireless interference. Your wireless network might be fine for checking your email and browsing the web, yet leave you in the lurch when it comes to streaming music and video.

Upgrading to a dual-band 2.4GHz and 5GHz Wi-Fi router might do the trick, extending your wireless range and offering the speed boost of 802.11n or perhaps even the new 802.11ac standard. While 5GHz networks tend to be faster, you’ll find that 2.4GHz networks offer greater range and do a better job of passing through walls and other objects. In some corners of your home you might actually get faster data speeds on your supposedly slower 2.4GHz Wi-Fi network.

If a Wi-Fi overhaul still doesn’t solve your home networking problems it might be best to abandon the airwaves and do things the old-fashioned way.

Ethernet cables are the fastest and most reliable way to run internet access around your home. Of course it’s not always practical to run cables to hard-to-reach corners – especially if you’re renting so you can’t drill holes or you’re in an apartment so you can’t crawl around in the ceiling or under the floor.

Thankfully there’s already a network of cables running to every room in the house; the electrical wiring.

You’ll also find Powerline AV wireless adaptors, creating a Wi-Fi hotspot for your lounge room which links back to your broadband modem via the electrical wiring rather than trying to create a wireless bridge.

You’re not restricted to two Powerline AV adaptors, you can install a few around your home to connect up devices like computers, media players and games consoles which aren’t happy with the signal from your Wi-Fi network. It’s a handy way to wire up the streaming video player in the bedroom, rumpus room or study – knowing that you can take the Powerline AV adaptors with you when you move house.

You won’t get the same data speeds as running internet cables, but Powerline AV adaptors are less about speed and more about reliability. You’re also at the mercy of the quality of your electrical wiring, the distance between the adaptors and possible noise from other electrical appliances in your home.

Powerline AV500 adaptors promise 500 megabits per second but, as with all potential networking speeds, at best you’ll get about a quarter of this. Even a few rooms away they should still be good for 20 or 30 Mbps – more than enough to fling Netflix around your home or maybe stream video from a Network Attached Storage drive. If Wi-Fi lets you down and Ethernet cables just won’t reach, Powerline AV adaptors might come to your rescue.