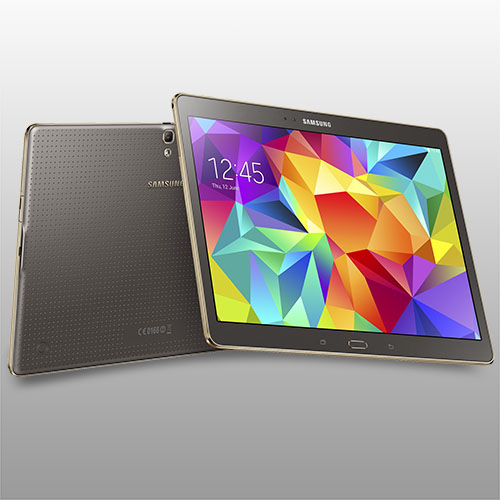 Samsung was the first firm to try to take on the iPad juggernaut with the original Galaxy Tab device, way back in 2010. Since then, the Korean firm has produced near countless iterations of Galaxy Tab concepts, most of which have played in a more budget-centric space than Apple pitches its iPad products. Whether you’re after a Galaxy Tab for the kids or a Galaxy Tab with inbuilt stylus for productivity, Samsung would very much like your money, but by and large they’ve been budget specification devices.

That’s not the case with the Galaxy Tab S, which rather firmly sits in the premium price category. The top of the line Galaxy Tab S with a 10.5 inch display, 16GB of onboard storage and 4G LTE carries an RRP of $749. If you don’t want integrated 4G, the next cheapest model in the 10.5 inch space doubles the storage to 32GB but is only $50 cheaper at $699. I’ve been testing out the Wi-Fi only 10.5 inch 16GB variant, which sells for $599; there’s also a range of similar Galaxy Tab S tablets with 8.4 inch display screens that run from $479 to $629.

The Galaxy Tab S features Samsung’s own Exynos 5 Octa processor, combining two processors; one quad-core 1.9Ghz processor and a 1.3Ghz Quad-Core processor. It’s well stocked with 3GB of RAM, and this led it to one of the best results in the synthetic Geekbench 3 benchmark I’ve seen on a tablet, with an impressive score of 2685. This is one fast tablet, in other words.

It’s also a tablet with an impressive display, not just in measurement terms, but also in specifications. The 10.5 inch variant has a display resolution of 2560×1600, giving it crystal sharp resolution with high quality video. Like most tablets the camera isn’t much to get too excited about compared to a proper digital camera, but at 8MP if you’re truly desperate it’s workable enough.

If you’ve seen Samsung’s Galaxy S5 smartphone, then you’ll almost immediately be struck by the fact that the Galaxy Tab S shares the same design, only to a larger scale. That does mean that it’s a resoundingly plastic tablet, but unlike the Galaxy S5 it doesn’t feel like flimsy plastic, something that’s no doubt aided by the fact that the rear case is fixed in place. It’s also remarkably light and thin, putting even the much vaunted iPad Air to shame in this regard.

The question is, however, whether it’s worth buying over an iPad.

While the hardware is impressive there are a few quirks with the software that aren’t quite as stellar. Samsung’s own TouchWiz launcher is the default operating environment. This allows it a few neat tricks such as multi-window app launching, but that’s limited to a set number of applications that Samsung’s built with the Galaxy Tab S. You’re not going to be mistaking it for a fully performing laptop any time soon. Samsung’s thankfully finally done away with the weird software bug that meant that if you were using their launcher you couldn’t alter the apps in the dock, but TouchWiz is still genuinely odd when it comes to even simple functions such as folder creation or app movement. There’s a small range of “gift” applications that come with the Galaxy Tab S, although there are fewer than you’d get in the US thanks to different licensing agreements, especially for music.

The Android app environment has improved markedly for tablet specific apps since the days of that original Galaxy Tab, but there’s still no doubt that there’s a gap between the worlds of Android and iOS. Put simply, there are still more tablet-specific apps that work in a consistent fashion on iOS right now. With Android, most apps will work but it’s a bit of a guessing game how they deal with different screen sizes and resolutions, and the Galaxy Tab S is no exception. If you’re simply in the market for a new tablet and don’t already sit in the iOS or Android camps, I’d still advise an iPad as the better overall bet.

On the other hand, if you’re after a premium Android experience because you’ve already got a lot of data and apps in the Android camp, then the Galaxy Tab S should shoot to the top of your shopping list. Samsung’s launcher and supplied apps aren’t great, but they’re easily overcome with any other launcher. The underlying hardware is fast and the screen makes for a great viewing platform for any kind of video content. It’s light to carry and while you can get cheaper Android tablets from any number of manufacturers, including Samsung itself, it’s the best Android tablet you can buy right now.