Solid State Or Mechanical: Which External Drive Type Should You Buy? 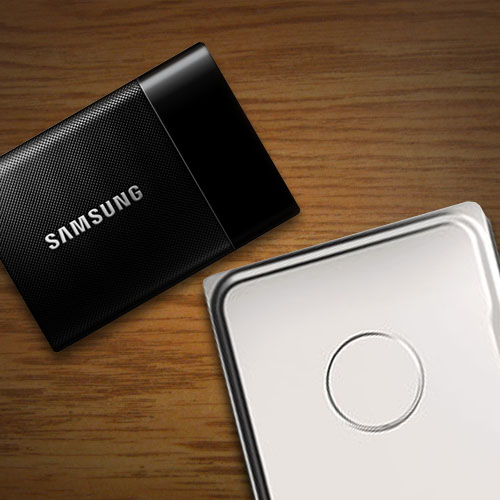 Storage has, in real terms, never been cheaper. I’ve been writing around IT for long enough that I can recall when even moderate sized drives cost in the many hundreds or thousands of dollars, and took up serious space underneath your desk.

That’s all changed as memory capacities have grown, and it’s now almost embarrassingly easy to add terabytes of data to your computer with little more than a USB cable.

Which doesn’t mean that the choice should simply go to the cheapest drive you can buy. Yes, it’s perfectly feasible to score a 1TB drive for under a hundred bucks these days, but in the budget space, you’re typically looking at older, heavier drives that require their own power supplies beyond that drawn from a USB port.

So what do you do if you want a truly portable expansion drive? You spend a bit more money for the privilege, or cut back solidly on the amount of storage you carry around with you.

Yes, there’s a very large gap in pricing between those two drives, both of which are lightweight for their type and extremely portable. There’s a solid reason, however.

Seagate’s Seven drive is a super-slim — it’s only 7mm thick, which is remarkable for a drive with mechanical moving parts — and comes in a silver case that’s reminiscent of full size hard drives, with smoother edges, naturally. There’s a blue activity light on the top front of the drive to let you know that it’s doing something, and a provided USB 3.0 cable for data transfer. Data transfer speeds over USB 3.0 averaged around 100MB/s, which is reasonable for a mechanical USB 3.0 drive. You do pay a premium for that slender design, however.

So how does Samsung justify $429 for the same amount of storage? There’s a couple of factors at play here. Firstly, the T1 is an SSD — Solid State Drive, for the uninitiated — which means that there’s no moving parts onboard at all. In theory it’d be a poor idea to knock the Seagate Seven or any other mechanical drive while it was busy reading or especially writing data, but the T1 wouldn’t even notice, because there’s nothing actually whirring around to take notice.

The use of solid state memory also means that the T1 is markedly smaller and lighter than even the very light and thin Seagate Seven. Where it looks like a hard drive, only thinner, the Samsung T1 more closely resembles a slender business card holder, only a lot lighter. It’s no joke to say that I’ve had the T1 in a pocket and forgotten it was there, because it’s so insanely lightweight.

It’s not just light that sells the T1, however. The lack of moving parts in SSDs means that they can record blistering data read and write times, which is why they’re very commonly found in mid to high-end laptops these days. If you’ve purchased an Ultrabook-style PC (or, on the Mac side of the fence, just about any modern-era Macbook) it’s running on an SSD. I could easily register speeds over 400Mbps with the Samsung T1, which makes it a good investment if you’re consistently writing large amounts of data to and from your laptop, especially if it’s a laptop with constrained storage of its own.

That doesn’t mean that either drive is an absolute must-buy for everyone; they’re very much niche devices. The T1 is a great little drive, but its asking price means that you pay very much more per MB of storage space than any other mechanical drive. The Seagate’s likewise a nice-looking drive, but even within the purely USB bus-powered crowd, $189 for 500GB of storage is a pricey proposition.