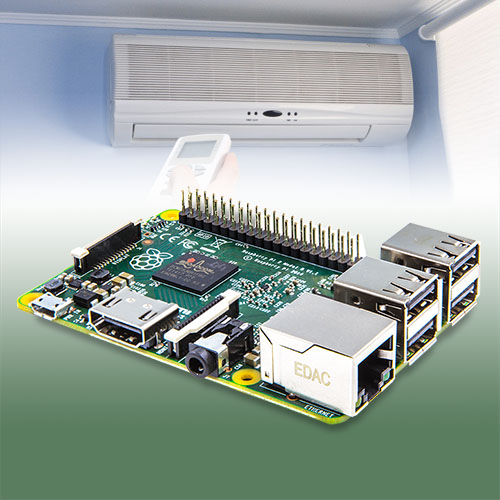 As the weather warms up, the little Raspberry Pi offers a handy way to stay cool and save some money.

It’s easy to get excited about the fancy new world of smart appliances, but realistically most of us can’t justify replacing all of our old dumb appliances. Thankfully there are a few options for retro-fitting home automation features to the gear you already own.

My old air-conditioning system is a constant source of frustration, because it’s so difficult to control. The problem is that the temperature sensor is located at the air intake, which is near the upstairs bedrooms rather than in the downstairs living area.

The system is underpowered for the size of the house, so during the day we only run the cooling downstairs. The problem is that the air-conditioner is monitoring the upstairs temperature, so it doesn’t switch off the cooling when it reaches the right temperature downstairs.

On a really hot day the cooling runs constantly, because it’s so hot upstairs, which drives up my power bill and puts extra wear and tear on the air-conditioner which I suspect is the cause of several expensive repair bills. All because the jerks who built my house were too cheap to put in an air-conditioner powerful enough to do the entire house.

The last few summers I’ve developed a knack for manually tweaking the thermostat during the day to make it run more economically, plus I’ve taken measures to help keep upstairs cooler on a hot day. What I really need is someone to stand next to the downstairs control panel and regularly switch between cool and fan to maintain a constant downstairs temperature – which is where the Raspberry Pi might come to the rescue.

Thankfully my air-conditioner came with an infrared remote control for the downstairs control panel. In theory, it should be simple to hook up a temperature sensor and an infrared transmitter to a Raspberry Pi, so it can monitor the temperature downstairs and send commands to the aircon to switch the cooling on and off. I could sit the Pi on the top shelf in the kitchen, facing the control panel, and let it happily manage the aircon in the background.

Of course in practice it’s probably not that straightforward, as I’ve learned working on other Raspberry Pi projects like my arcade coffee table and remote control rover. Thankfully the popularity of the Raspberry Pi means that there’s a wealth of how-to guides online for many projects and someone has already written LIRC software for using the Pi as an infrared receiver and transmitter – which will be half the challenge.

This kind of setup could just as easily be used to control your heating, or any other appliance with an infrared remote. Is there room for a Raspberry Pi tucked away in a corner of your home?