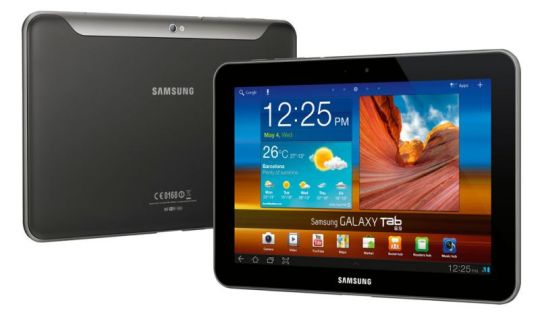 While the iPad is a sleek tablet, thankfully Google’s Android operating system gives gadget makers the freedom to make tablets of all shapes and sizes. Samsung is leading the charge with the impressive Samsung Galaxy Tab 8.9 4G.

This Samsung tablet is smaller, thinner and lighter than the latest iPad — making it very comfortable to hold. To be fair the iPad’s 9.7-inch screen is almost an inch diagonally wider than the Galaxy Tab 8.9, but you don’t feel the difference in day-to-day use. The 8.9-inch screen gives the Android interface plenty of room to move, with the dual-core 1.5 GHz processor and 1 GB of RAM keeping things snappy.

Fire up the 8.9-inch Samsung and you’re greeted by a bright, crisp 1280—800 PLS LCD display. It’s sharper than the iPad 2 but admittedly still falls far short of the iPad 3″²s new retina display. The use of LCD offers wide viewing angles, good contrast and bright whites help deal with outdoor glare. The trade-off is that colours aren’t quite as vivid as the AMOLED displays found on many Android gadgets.

The Samsung can hold its head high alongside the iPad thanks to its compatibility with Telstra’s new super-fast LTE mobile broadband network. The new iPad also has 4G written on the box, but unfortunately it’s not compatible with Telstra’s 1800 MHz LTE network. While the Samsung can squeeze more than 40 Mbps out of LTE in Australia’s major cities, the new iPad must be content with up to 20 Mbps via DC-HSDPA.

This is a considerable speed difference but to be fair Samsung owners are unlikely to notice a significant performance boost between 20 and 40 Mbps whilst doing day to day tasks (unless they’re using a notebook tethered to the tablet’s LTE access via Wi-Fi). Once Samsung owners roam beyond the inner suburbs they’ll drop back onto DC-HSDPA anyway. LTE is handy, but it alone shouldn’t seal the deal.

The Samsung also offers 802.11b/g/n Wi-Fi and Bluetooth 3.0, but what’s disappointing is that there’s no Wi-Fi-only 8.9-inch Samsung available in Australia. So you’re forced to pay for mobile broadband compatibility whether you need it or not.

Another disappointment is that the Samsung comes with Android 3.2 “Honeycomb” pre-installed rather than the new Android 4.0 “Ice Cream Sandwich”. To be fair an ICS update is on the way and the wait is only likely to bother Android die-hards. What’s perhaps more frustrating is the Samsung lacks micro-HDMI, micro-USB and micro-SD slots. As with the iPad, you can get various adaptors for Samsung’s proprietary 30-pin connector. The lack of a micro-SD slot means you’re stuck with the Samsung’s 16 or 32 GB of onboard storage.