Taking Your Computing To The Big Screen 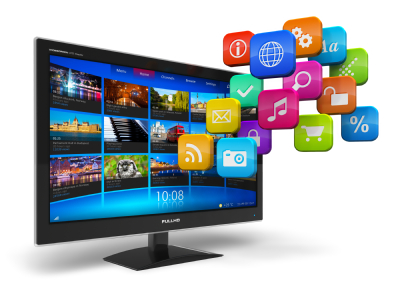 If you want to move a presentation — or for that matter, a video, a game, or anything else you’ve done on your computer — out to a larger display, you’ve got a couple of options. For some time now, the popular method for going big screen from a PC has involved a projector, and that’s fine within a business context where you’ve got a suitable display screen and throw space, but what about if you’ve got an existing TV display and no projector to hand?

Most laptops have some form of external display connector, whether that’s an older VGA-style connector for hooking up to a PC monitor, or on newer models, possibly an HDMI connector. Direct cable connection to a TV screen used to be a world of compromise; you either had to put up with unusual screen resolutions, fuzziness onscreen or a whole lot of fiddling to end up with anything that was bigger than a postage stamp. The advent of flat panel TVs has changed that markedly, as most of them support the exact same resolutions that your notebook’s LCD display does. What you see is what you get, and for the most part with a modern operating system along for the ride, it’s just a simple matter of plugging in, selecting the relevant input from your TV’s menu and working (or playing) from your big screen.

What about if you’re using a laptop that doesn’t have an external display connector? There’s still a few options for larger screen computing open to you. Newer Ultrabooks may adhere to Intel’s Wi-Di standard; this is a Wi-Fi based screen sharing technology that does rely on the TV panel also being Wi-Di compliant, or using a Wi-Di adaptor. If you’ve got both, though, you should be able to send your Ultrabook’s display straight to the screen. Apple’s got a similar technology, called AirPlay that works from newer Macs using the Mountain Lion OS, but you don’t need a specific TV; instead it runs through the company’s $110 Apple TV box out to any HDMI-equipped TV. As with all things Wi-Fi, the quality of your wireless connection will have an effect on the quality of the onscreen image, although that’s going to be less of an issue if you’re viewing still images; video or games material may stutter a little.

What if your laptop has no Wi-Di or Airplay compatibility? Your last port of call should be the original manufacturer; while your laptop may lack some kind of external display output option, there’s always the possibility that the manufacturer makes a plug-in dock that includes just that kind of functionality. The dock won’t be free, but it should also add a few additional ports and possibly an optical drive if your existing laptop lacks one.