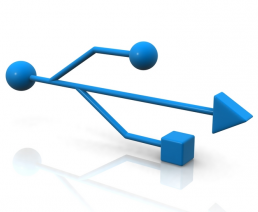 The USB standard is an exceptionally robust one. Over time, it’s evolved from a simple peripheral connect standard to a device connection found on every PC and laptop you’d care to name.

When USB was first announced and started to appear on early motherboards and laptop system in the late 1990s, I was working a technical support job that covered all aspects of computer technology, such as it was then, and not a day would go by without a customer call asking what this odd looking rectangular port was on the back of their new PC.

Some worried that a plug cap had fallen off, one memorable customer worried that mice would get into the PC. Presumably he suffered from attacks from exceptionally small mice. Even when I explained that it was a new type of connector standard that would, at least, replace the PS/2 connectors used commonly for mice and keyboards at the time, it was rather stuck with the problem that early on it was adopted on hardware, but there were precious few peripherals that would work with it.

That’s not the problem today, and we’ve moved way beyond a simple mouse and keyboard plug replacement technology with USB.

Although there is one minor annoyance with USB that I’m sure everyone has hit from time to time. It’s the issue of plugging it in the right way around. If you look at the end of a standard A-type (that’s the longer rectangular one, as opposed to B, which is most commonly used for printer cables, or the mini- and micro- variants used mostly for mobile devices), you’ll quickly see that there’s a thick part within the plug that houses the circuitry but also means that despite its rectangular shape, there’s only one way it will plug in. It’s minor, but easily infuriating to struggle with a USB plug, especially if you’re reaching around the back of a desktop machine under a darkened desk. Or maybe that’s just my fumbling fingers at play.

My fingers will see a respite in the near future, however, as the USB Implementers Forum, the group responsible for the USB standard has introduced a new standard for connectors, known as USB Type-C. Type-C plugs are relatively small, and will support the newer and faster data transfer speeds of USB 3, because USB isn’t just a peripheral connection technology any more.

The more interesting part for those of us with fumbling fingers is that Type-C plugs will be vertically symmetrical, meaning that there will no longer be a “right” or “wrong” way to plug them in. Similar to the Lightning connectors found on Apple’s iPads and iPhones, Type-C plugs will merrily plug in any way you happen to push them, removing this particular pain point.

Having said that, there will be a fresh set of pain points, because, like USB back in the late 1990s, for a while it’s likely there won’t be that many USB Type-C devices to connect up to the new port. It’s quite likely that USB Type-A connectors will run concurrent to Type-C on many motherboards for desktops and integrated notebook designs to enable as wide a variety of connections as possible, and equally likely that we’ll see curious plug adaptors aplenty as well.