What is Telstra TV? 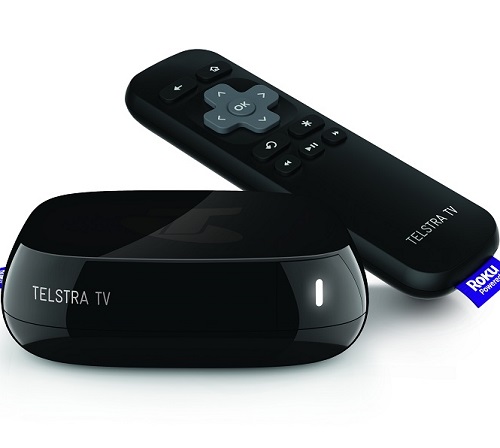 These days Australians are spoiled for choice when it comes to online entertainment, but things can get complicated if you want to watch streaming video services on your television rather than your computer, smartphone or tablet. The Telstra TV aspires to be the one lounge room box to rule them all – it’s not there yet, but what’s on offer might suit your viewing habits.

First up, it’s important to note that the $109 Telstra TV doesn’t actually let you watch live broadcast television like Telstra’s now discontinued T-Box personal video recorder. The Telstra TV box doesn’t feature digital TV tuners, it’s just for streaming video from the internet. It connects to your home network via Ethernet or Wi-Fi, with an HDMI video port to plug into your television.

Secondly, the Telstra TV is only available to Telstra home broadband customers. Telstra is actually giving it away to customers on some of its high-end broadband plans. If you’re not with Telstra, you might look to alternatives like an Apple TV or Google Chromecast to watch internet video on your television.

Look closely and you’ll see the tiny Telstra TV box is actually a rebadged Roku 2 streaming media box imported from the US. It comes with a remote control so you can drive it from the couch.

Unfortunately Telstra has locked this Roku box down to only work with a handful of video services. Local subscription services Netflix, Presto and Stan are all on offer, although Australian streaming video pioneer Quickflix has been left out in the cold. It’s rare to find these three video services on the one home entertainment device, although it’s worth asking whether you’d pay $35 per month to sign up for all of them. Telstra might throw in a few months for free.

Along with watching subscription video services, the Telstra TV lets you hire movies from Bigpond Movies. Watching Presto and Bigpond Movies is “unmetered” for Telstra home broadband customers, meaning it doesn’t count towards your monthly limit.

The Telstra TV also grants you access to free Catch Up TV from Seven, SBS and Nine, with ABC and Ten expected to be onboard by the end of the year. Once again, access to all five Australian Catch Up services in the one box is rare because Nine’s Jumpin is only available on a handful of home entertainment devices.

Beyond these services the Telstra TV offers a handful of internet video services such as YouTube, Red Bull TV, Awesomeness TV, Wall Street Journal, GoPro, Vimeo, CrunchyRoll and Dropbox. Finally there’s Roku’s own Media Player app which lets you play video files from a USB stick or SD card. Alternatively it can stream video over your home network from a DLNA server running on a computer or Network Attached Storage drive.

Unfortunately there’s no access to the third-party Roku app store, so you’re out of luck if you want to install third-party media player apps like Plex, or foreign video services like Hulu and HBO Go. If you’re keen on these you’re better off importing a Roku, although it’s a little tricky to get one working in Australia.

So is the Telstra TV a good fit for your lounge room? It all depends on what you want to watch and which home entertainment gear you already own. Apple fans should definitely wait and weigh it up against the new Apple TV, which should arrive in Australia before Christmas. There’s also a new Google Chromecast on the way. It’s also worth weighing up Telstra TV against these options to see which best meets your needs.