What will the Apple Watch bring to your wrist? 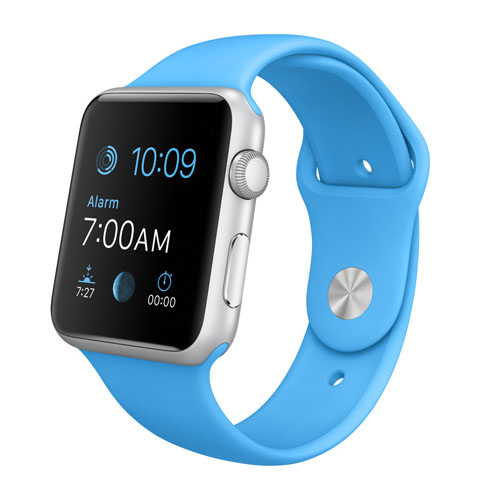 ‪Apple’s long-awaited smartwatch has finally seen the light of day, but what can the Apple Watch do apart from tell you the time?‬

‪Wrist watches have gone out of fashion in the last few years, made redundant for many people by the fact that it’s easy to slip their phone out of their pocket when they want to check the time. So it’s somewhat ironic that smartphone makers like Apple, Samsung and Motorola are pushing the wrist watch revival in the form of all-singing, all-dancing smart watches.‬

‪So how smart is Apple’s smartwatch? When the Apple Watch is at rest, the screen displays an analog or digital watch face so you can read the time at a glance. Being a tiny LCD screen, it’s easy to change the look of the Apple Watch and your options include everything from a traditional chronograph-style watch face to the pop culture classics like Mickey Mouse pointing at the numbers.‬

‪You can also use animated watch faces, like a butterfly flapping in the background, but this is likely to take its toll on the battery.‬

‪Apart from telling you if you’re running late for the bus, the Apple Watch’s primary job is to act as a second screen for your iPhone – so you can glance at notifications without reaching for your phone. You can forget about the Apple Watch if you’re an Android or Windows Phone user, although if that’s the case you’re unlikely to be won over by Apple’s offerings anyway. You might look to something like a Pebble or the range of Android Wear devices.‬

‪The Apple Watch pops up notifications for incoming text messages, and you can flick back a short response or else dictate a reply to Siri – who now lives on the Apple Watch and is there to answer all your questions. The screen also offers caller ID and you can even make and receive calls. Keep in mind that the watch doesn’t take a SIM card, it simply acts as a wireless bridge to your phone. If you’re in the middle of something on the watch you can pick up where you left off on your phone, or vice versa.‬

‪You can also receive notifications for emails, calendar appointments and other events on the Apple Watch, plus there’s support for a wide range of third-party apps like Twitter and Facebook. Thankfully you can set the watch to silent so it gently taps you on the wrist to alert you to a notification, which is certainly more subtle than your phone beeping and buzzing in your pocket or on the table. The watch can even use different tapping patterns for different messages.‬

‪Flick upwards on the watch face to reveal Glances – offering snippets of important information such as calendar appointments, weather forecasts and traffic conditions. The predictive alerts which already pop up on iPhones, such as the travel time to your next appointment, may also make an appearance on the Apple Watch.‬

‪It remains to be seen how much control you have over all these notifications. Hopefully you will be able to disable them on an app by app basis, as you can with an iPhone, so your watch isn’t constantly nagging you over things which aren’t that important.‬

‪The Apple Watch also has a strong focus on fitness, with the ability to track how active you are during the day and how long you go without standing up. When you’re ready to break a sweat it has a specific workout mode which includes tracking your heart rate. Once again it’s reliant on the iPhone in your pocket for GPS tracking when you go for a run.

‪The other key feature of the Apple Watch is built-in NFC for short-range wireless interactions, along with support for Apple’s Passbook app which lets you store things like e-tickets and loyalty cards. Apple also plans to turn the watch into a tap-and-go credit card, compatible with Visa, Mastercard and AMEX credit and debit cards.‬

‪You’ll be able to use the Apple Watch to pay in any store which supports PayPass and PayWave contactless payments, although it’s initially only slated for the US and there’s no word when support for tap-and-go payments might come to Australia.‬