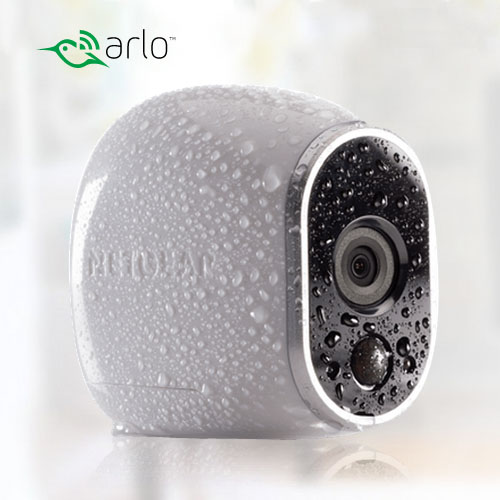 The use of internet-enabled video for security purposes is nothing new, but in recent years there’s been an explosion of cheap IP-based cameras, primarily because there’s been a confluence of generally-improving broadband to carry higher quality video along with significantly cheaper optics to produce the video you’re going to watch.

I’ve spent the last couple of weeks appraising Netgear’s new Arlo range of security cameras, which start at around $349 for a single camera system, and can encompass quite a few more. Arlo’s promise is that they offer “simple” security that doesn’t rely on wires or difficult installation steps. That’s because the Arlo cameras themselves, which resemble the tiny white sentry guns from the popular videogame Portal are entirely wireless, working from a larger white hub device that you plug directly into your home router. Setup isn’t much more complicated than pairing a camera (or cameras — additional units will run to around $249 each) to the base station from the Arlo smartphone app, setting up an Arlo account and placing it wherever you’d like to monitor for potential security issues.

On the plus side, when Arlo works it is beautifully simple, with cameras that magnetically latch onto anything metallic and work in both full sunlight and in a reduced black and white only mode when the light level dips too low. Because Arlo is app-based, you get an alert on your smartphone whenever the cameras are activated, and because they only activate on motion, the embedded batteries within should last a decent amount of time. Netgear’s estimate is for up to six months between battery changes, but that could vary depending on the quality of your batteries and the quantity of content each Arlo camera ends up recording.

Everything Arlo does is stored in a secure online cloud account, so it’s worth having decent password security there. By default Netgear provides 200MB of storage, kept for up to seven days. If you want more time or longer storage, you’ll have to cough up $13/month for a 30-day backup plan or a $19/month for a 60-day backup plan.

Netgear’s Arlo is simple to set up, but it’s not without its quirks. When I first installed a two-camera Arlo kit in my office, it resolutely refused to work. The app could “see” the cameras, and I could use its snapshot mode to sort out positioning or angles, but any attempt to record video was met with timeout error after timeout error. Networking is rarely the easiest of disciplines, and it was frustrating. Some correspondence with Netgear’s support forum revealed the problem was on Netgear’s side — remember, everything on the Arlo camera goes up into Netgear’s cloud servers, so it wouldn’t be wise to place a camera directly outside your shower — and then everything started working as it should. If you’ve got a lot of devices, such as a PVR, or games consoles or computers running wired from your home router, placing the additional rather large Netgear Arlo Hub could be troublesome. Finally, while it’s a lot easier than some fully wired systems, it’s also rather specifically limited. This isn’t a long-term monitoring solution the way some closed circuit systems are, but instead an entirely reactive system that only fires up, records and alerts you on movement. As such, I’ve had more than a few instances where it’s told me there’s a courier at my front door when I’ve been out of office, but by the time I switch to its “live” feed, they’re already long gone.

That being said, if your security needs are simple and you can wear the installation cost, the Arlo is very easy to use compared to more full-strength security solutions, while retaining a dash of style along the way.