Will The Internet of Things change your business for better, or worse? 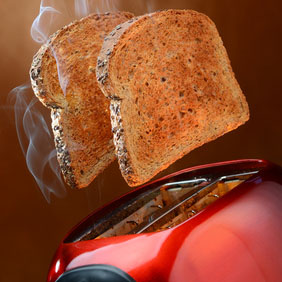 It’s not about having a toaster that also acts as a file server, but instead a toaster that exists on a network as part of that network, which brings with it the possibility of all kinds of management tasks.

At the simple level, you could have a network ready toaster that connects to your bedroom light and automatically starts making toast while you’re still blinking to open your eyes in the morning. Your toothbrush could monitor not only the quality of your brushing style, but perhaps also when it needs to be replaced to keep your teeth bright and shiny, sending that information to your laptop or mobile so that you can make better decisions about toast and teeth respectively.

Those are both consumer examples, but there’s even more scope for an Internet of Things revolution in the business space, where managed devices can bring a lot of efficiency, dropping costs as you go. Gartner’s research suggests that there could be 26 billion devices on the Internet of Things by 2020.

An AVG research study of small business attitudes to the Internet Of Things that covered 2,000 small businesses, including 250 small Australian businesses revealed a number of interesting results.

Firstly, the Internet Of Things isn’t well understood, with 57 per cent of the Australian businesses surveyed failing to understand what the term meant. 15 per cent of those who misidentified the term figured it had to do with some kind of email system.

While connected and managed devices could lead to all sorts of improvements for small businesses, there is an aspect that’s worth keeping in mind, and that’s the issue of security. This weighed solidly on those surveyed, and it should, because a device connected to and capable of being controlled from a network is one that could be controlled by people who aren’t meant to be there at all.

Some of this concern naturally revolved around the capabilities of the device in question. Grant the world access to that theoretical Internet Of Things toaster, and you might end up with a charred slice or two, but for more complex business tasks it’s a little more risky, both in terms of wider access to the network, depending on what the device can or cannot do within the network itself, as well as the data that the device itself is aware of. Your toaster probably won’t know much beyond the capacity of its crumb tray, but an IoT device with real storage could reveal real data that you’d rather keep confidential.

Interestingly, the same survey suggested that while this kind of security was a worry, most small businesses still figured that human factors, rather than hackable Internet Of Things devices would continue to be a larger concern for their business. I suspect they’re probably right, if only because it’s a very old story in terms of security. You can — and you should — do everything to protect both your home and business PC from intruders, but if you want to have access yourself, there has to be a key. Socially engineer that key out of people, and the layers of security just melt away.