Will Windows 8.1 impress you? 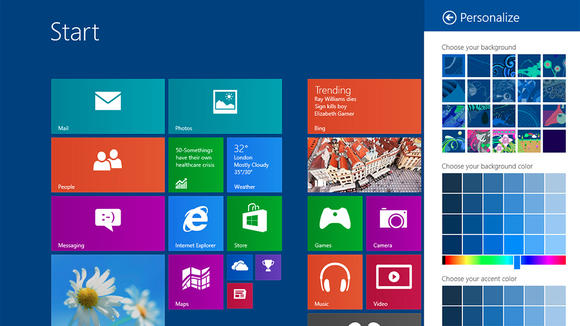 There’s always a learning curve with new software, but when you take the world’s most used operating system and change things around a lot, there’s bound to be more than the usual amount of complaining when users get around the new interface. That was exactly the situation when Microsoft released Windows 8.

The introduction of Windows 8 was one of the boldest moves the company ever engineered. Microsoft was built on Windows, and changing the interface so very radically was something Microsoft had never tried before; the closest “big” change to Windows we’d seen in an interface sense was the shift from Windows 3.11 over to Windows 95 and its start-button based UI. Windows 95 was a long, long time ago, and even it wasn’t quite as radical a change as the shift from Windows 7 to Windows 8, with its focus on touchscreen elements, tiles and the elimination of the start button altogether even if you did stick it into desktop mode.

Various third party workarounds could bring Windows 8 “back” to an experience that was, more or less Windows 7, but Microsoft’s on the verge of releasing an update to Windows 8 that it says was designed on the basis of all of the feedback they’ve received regarding Windows 8 already. Windows 8.1 — which you can download in preview form right now if you’re feeling brave, although this is always a terrible idea for any business-critical system — will reintroduce the start button for desktop mode amongst other changes. The focus remains, however, on a tiled-based approach built around touch platforms, so those looking for a complete turnaround in the Windows world will continue to be disappointed. It is possible to get Windows 8.1 to boot directly to the desktop, but it’s a convoluted thing to set up. If you’re keen, under Windows 8.1, you’ve got to be in desktop mode, right click the desktop, choose properties, then navigation, and under the Start Screen section there’s a checkbox for going straight to the desktop if that’s what you want.

Other new features include being able to resize and group tabs, search functionality focused around Microsoft’s online Bing platform — which means you get web results next to your local file search results — as well as touch improvements if you’re using a tablet or touchscreen enabled laptop. They’re set to become more common with Intel updating its specification for Ultrabooks to make touchscreens mandatory. Where Windows 8 allowed for two simple side-by-side application sizes, 8.1 will allow you to snap them to any particular size you’d like. Microsoft’s updating all of its underlying core applications as well, from Internet Explorer 11 even through to the Paint app.

The question remains, however, as to whether or not the changes to Windows in 8.1 will be enough to reinvigorate enthusiasm for Windows itself. For the vast majority of people, Windows is something that’s just there. It’s the operating system that we run word processors (mostly from Microsoft too), spreadsheets, email clients and web browsers on. Windows 8 didn’t reinvigorate the PC market the way Microsoft had hoped it will — and it’s not clear if Windows 8.1 will either.