Windows 10 will be free, but there may be a wait to get it 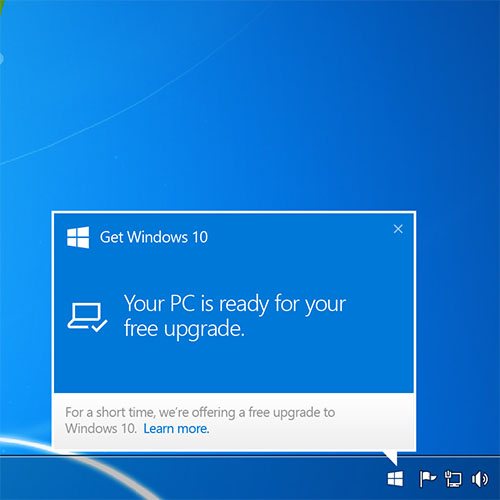 It’s been known for quite some time now that Microsoft would be offering Windows 10 as an upgrade for existing Windows 7 and Windows 8 users free of charge.

That’s because Microsoft’s been very keen to get as much of its userbase on the one code system, whether that’s across desktops, laptops, tablets, or even mobile phones. It’s easier to develop for, it’s easier to keep secure, and, of course, if you’re Microsoft, it’s the way to keep the revenues flowing in, because while Microsoft Windows 10 will be a free upgrade for genuine Windows users, that’s a deal that only runs for the first year at this point, and Microsoft’s in the process of changing itself over to a full service company rather than one that sells software per se. It would rather charge you a subscription for storage, or for Office, or for Xbox Live if that’s your thing.

But first there’s the hurdle of actually getting Windows 10 onto the machines that qualify for it. That’s quite a challenge, given that Windows still has a massively overwhelming share of the world’s desktops compared to challengers such as Mac OS X or the many flavours of Linux.

Officially speaking, Windows 10 will be made available to download on July 29th. That’s a date that Microsoft set quite some time ago, so you might expect that come July 29th, the download floodgates will open, and those keen to taste the final version of Microsoft’s latest operating system would be able to do so.

There are some solid reasons not to, by the way. I wouldn’t generally advise it for any machine that’s critical to your business, or any system that only just meets the minimum specifications. In the first case, while Microsoft has been beavering away on bugfixes through the beta stage of Windows 10, in code that runs to many billions of lines and has to interact with millions of secondary applications, some of which has code that was originally written decades ago, there are bound to be bugs, quirks and problems. In the latter case, it’s quite likely that you’ll find Windows 10 runs very poorly if you’re only just tipping over the minimum specification line, and your experience may be better staying on your older OS.

In any case, Microsoft’s announced that while July 29th is the official availability date — and that’s US time, so the 30th in Australia in most real terms — the scale of actually rolling out availability means that it’s going to have to offer a staggered rollout for its new operating system anyway.

Writing at the official Microsoft Blog, Microsoft’s Terry Myerson, executive vice president of operating systems revealed that the first group who’ll get “full” Windows 10 will be those on the Windows Insider program — essentially those who signed up to test the beta version.

From there, it will move on to anyone who’s requested an upgrade. If you’re a genuine Windows 7 or 8 user, you’ve probably had a pop-up Window suggesting you “request” an upgrade sometime recently. That’s the signup for Windows 10, and that group will get their free OS, but not all at once. Myerson notes that “Starting on July 29, we will start rolling out Windows 10 to our Windows Insiders. From there, we will start notifying reserved systems in waves, slowly scaling up after July 29th. Each day of the roll-out, we will listen, learn and update the experience for all Windows 10 users.”

There’s no obvious way to “queue jump” if you’re massively keen, but the reality is that Microsoft’s rolling out to systems that number in the many millions, and that’s not a small issue for what will be a major system overhaul, especially if you’re jumping from Windows 7 to Windows 10. For most people it may be wise to wait anyway, even if you do get invited in an early wave.