Windows 8 – are you ready for change? 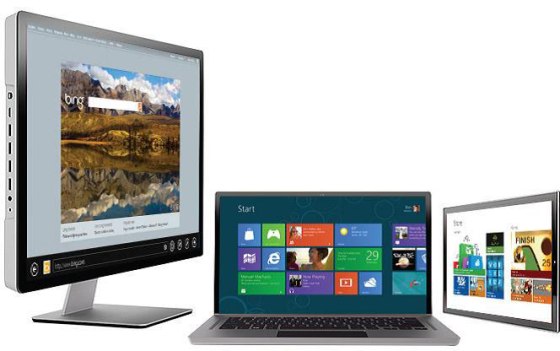 The line between desktop and mobile devices is blurring but, rather than let Apple lead the way, Microsoft has seized the initiative with Windows 8. The new tablet-style interface is likely to appeal to the iGeneration, but it might come as quite a shock to old-school PC users.

Windows 8 drops you in the deep end by launching into the new “Modern UI” interface (formerly known as “Metro UI”) which was borrowed from Microsoft’s smartphones. Instead of the traditional Windows desktop you’re now faced with a row of icons which you can click to launch common applications such as your email or the browser.

The Modern UI icons are actually live “tiles” which change to give you updates — for example the Weather tile displays today’s forecast while the Mail tile scrolls through your inbox. When you click on a tile it launches that application in a single full-screen window. Once you learn your way around it’s possible to complete many day-to-day tasks without leaving Modern UI, which is exactly what Microsoft is aiming for. Similar to Apple and Android gadgets, Microsoft wants to make it easy to get things done without struggling with the traditional desktop interface. If you’re familiar with Windows Phone 7 handsets such as Nokia’s slick Lumia 900 then you’ll probably feel quite at home with Modern UI.

Of course the difference is that Android and Apple’s iOS are designed to run on touch-friendly handheld gadgets, whereas Windows 8 is intended to run on desktop computers. In actual fact Modern UI is design for Windows 8 on desktops, notebooks, tablets and smartphones. Windows 7 can be rather clunky to use on a tablet, but that should all change with Windows 8. When you’re using a touchscreen gadget you’ll be able to flick and tap your way around Modern UI just like an iPad.

Microsoft expects that touchscreens will become more common on the next generation of notebook’s, particularly the super-thin Ultrabooks. Unfortunately Modern UI is less intuitive on a traditional desktop when you’re reliant on a keyboard and mouse. For example some of the gesture-based commands require you to move the mouse to the corner of the screen to trigger menus. The concept is similar to Hot Corners found in Mac OS, but it’s likely to be quite foreign to many Windows users.

It is possible to push Modern UI aside to use the traditional Windows desktop, but you’re in for a bit of a shock. The Windows Start menu is gone, having been the centrepiece of Windows for almost 20 years. You can still pin items to the taskbar and it is possible to find your way around, but it does take some time to adapt to the loss of the Start menu. The move to Modern UI while losing the Start menu is going to present a steep learning curve for some people, but if you persevere you’ll find Windows 8 has plenty to offer. If you’re an old-school PC user you might need someone to hold your hand to walk you through the changes with Windows 8.