Which gadgets belong in your long-haul travel bag? 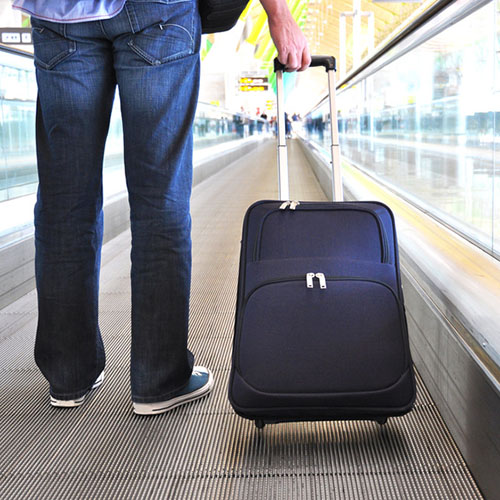 Whether you’re travelling overseas for business or pleasure, it’s important to pack the right tech to help you along the way.

Once upon a time preparing for a long flight simply meant picking up a good book at the airport newsagency, but things have changed significantly in the era of high-tech portable gadgets. You probably own more tech than will fit in your travel bag, so give some thought as to what goes with you and what stays behind.

You might instinctively reach for your notebook PC and charger, but think twice if you already own a smartphone or tablet. You might think that “computers” are for work and handheld gadgets are for “play” but you’d be surprised at how much work you can get done on a smartphone or tablet. The trick is to plan ahead with the right apps and services which allow you to get things done while you’re on the road, even when you’re offline.

What you’re really sacrificing by leaving your notebook at home is a physical keyboard. If an onscreen keyboard won’t cut it, perhaps invest in a portable Bluetooth keyboard for your smartphone or tablet – even the cheap ones from the supermarket are surprisingly good these days.

You’ll probably still see a productivity drop compared to typing on your notebook, but it might be a price you’re prepared to pay if it means you don’t have to squeeze a notebook and power adaptor in your bag – which soon gets heavy on your shoulder.

Give some thought as to how you’ll rest your smartphone or tablet at the correct angle as you type – you probably don’t want it lying flat on the table. A tiny flexible camera tripod like Joby’s Gorillapod can be a lifesaver here – turn it upside down, bend back the legs and it makes for a surprisingly effective smartphone or tablet stand. If you’re tight for elbow room on the plane you might alternate between the physical and onscreen keyboards.

If you’re on a long-haul flight then it’s worth asking in advance whether you’ll have access to a powerpoint or USB port in your seat. The former tends to be reserved for business class but these days you’ll sometimes find a USB port even in economy.

Having power at hand is a great on an international flight, but it still pays to prepare for the worst and charge up all your devices before you depart. Even that might not be enough for a long-haul to London or Los Angeles. A portable gadget charger is a sensible investment – keeping you up and running on the plane and perhaps also saving the day when you’re on the road. Check the power rating in mAh – the higher the rating the more times you can recharge your phone before the gadget charger needs a recharge. Also think about connectors – even if you’ve got an iOS device with a Lightning connector it still might be a wise investment to buy a charger with a standard USB port. This way it can cater to all your portable devices.

Handheld gadgets are very versatile but keen readers might find an e-Book reader like a Kindle or Kobo is handy to own even if you can read eBooks on your smartphone or tablet. The battery in an eBook reader lasts for weeks rather than hours, letting you preserve the battery life in your other gadgets for more important tasks. Often they’ll keep track of your progress as you switch between devices,  so you can jump from your eBook reader to your tablet and pick up reading where you left off.

Regular travellers might also invest in a pair of noise-cancelling headphones. They don’t work miracles, but they can turn the roar of the jet engines into a more tolerable dull background noise. They generally rely on AAA batteries, so look for models which will keep functioning as normal headphones when the batteries run flat. Also look for dual-prong adaptors so you can use the headphones with the plane’s entertainment system.

Sitting on a plane all day is no-one’s idea of fun, but if you plan ahead you can pack the right tech to help pass the time and stay productive.