Will a hybrid laptop make you happy? 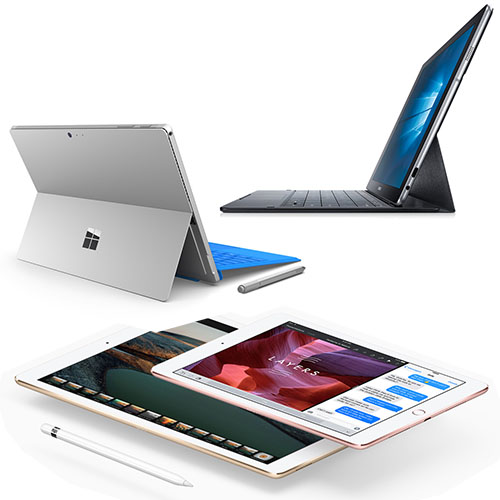 There’s a new crop of hybrid productivity devices on the market right now. All of them come in premium styles with premium prices to match, promising to offer the best of a tablet for simple content consumption style activities, whether your tastes run to reading web pages or playing games, but also full keyboards and multi-tasking so that you can get on with actually getting a job of work done, depending on what your work is.

The concept of a tablet PC certainly isn’t a new one. While Apple is widely credited with popularising tablets some six years ago, Microsoft has been pushing the tablet PC all the way back to Windows XP, and in IT terms that was eons ago. Those early tablets were premium priced, but they didn’t really stand out except in very specific vertical market situations where the cost wasn’t an issue.

The new breed of hybrids want to be all things to all users, but that’s not without its challenges. On Apple’s side, it has the new 9.7 inch iPad Pro, with an optional $229 “smart” keyboard. Like the Smart Keyboard you can buy for the larger iPad Pro, the 9.7 inch Smart Keyboard has soft feel to it with plenty of space inbetween keys, and if you’re already a big fan of iOS via an earlier iPad model or an iPhone, it’s a nice easy operating system to use. The issue here is that iOS is still a pretty lightweight OS when it comes to geniune productivity work. There are light versions of many of the apps you’d use on a Windows or Mac computer, but it’s not quite the same thing as the real apps. Multi-tasking is supported, and the A9X chip in the new iPad Pro is up to running two apps at once, but that’s it. If your needs are more complex, then as a productivity tool the iPad Pro falls a little short, although it’s an easy recommendation if you’re just looking to upgrade from an older iPad model.

Samsung has its play in the Android tablet space, and is of course well known for its range of Galaxy Android phones. It’s thus a little surprising that its latest Galaxy device is instead a Windows 10 hybrid tablet with the style of its Galaxy Android lines in a lithe form factor. The TabPro S benefits from using Intel’s Core M processors. These are the middle ground between the inexpensive but very low power using Atom processors, and the full fat, full power Core I series. Again, though, your needs have to be a little modest, because the $1,499 Galaxy TabPro S isn’t a high end performance machine. The keyboard — which also acts as the tablet cover but nicely is included in the box with the TabPro S doesn’t have much spacing between the keys, but it’s workable rather than feeling truly exceptional.

If you do need performance in a hybrid design, it’s still hard to look past Microsoft’s Surface Pro line. These are tablets with an optional keyboard, the $199/$249.95 “Type Cover” that also serves as a screen protector. Of the three hybrids, while it’s not cheap, I’d strongly argue that the Surface Pro 4’s keyboard is best of breed.

The Surface Pro isn’t quite as light or slim, or even quite as stylish as either the iPad Pro or Galaxy TabPro S, with a more boxy look that really does remind you of its PC heritage. Its secret sauce is in the inclusion of a range of Intel’s processors. At the entry level it sports a Core M processor, similar to the TabPro S, but higher up the range you get a choice of Intel Core I processors, which means that a Surface Pro 4 can be an exceptionally productive machine. It also benefits from having a full proper USB port, where the iPad only has Apple’s proprietary lightning connector and the TabPro S has the newer USB C connector only. With power to burn comes the issue of burning power, however; in head to head tests the Surface Pro doesn’t run for anywhere near as long as the iPad Pro or the TabPro S, although you could get more processing work done in that time. It’s also the most expensive of the three hybrid options, especially for the high end Core i7 options.

As with any IT purchase, it’s essentially a matter of best fitting your needs to your purchase. If iOS does everything you need, the smaller, cheaper iPad Pro might be your dream hybrid. If you know you don’t need heavy processing power but you do need full Windows and a very long lasting battery, the TabPro S could be the best bet. If you do a lot of heavy number crunching and can bear the initial outlay, the Surface Pro 4 might suit your needs optimally.