A decade of iPhones changed more than just our calling habits 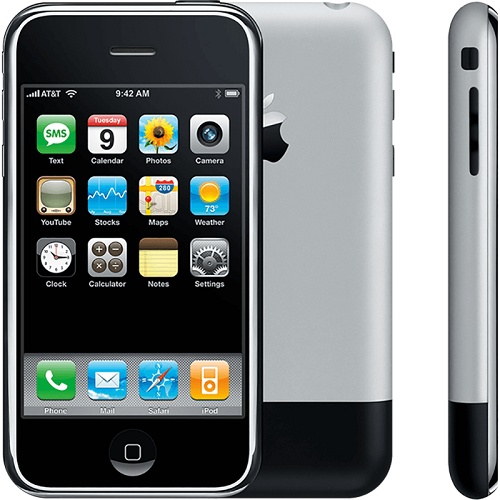 Just recently, the very popular Apple iPhone celebrated the tenth anniversary of its onsale date. Complex tech products don’t just spring up out of the earth, so it’s actually more like a grumpy teenager than a bright-faced ten year old, with even secretive Apple admitting that it worked for some years on getting the iPhone look and feel “just right” for launch.

That original 10 year old iPhone was never formally launched in Australia back in 2007, although very dedicated Apple fans did import some of them. If you’re still holding onto one, it’s perhaps a collector’s item but not likely to be much of a phone any more, because it was a 2G device, and our local 2G networks only have a matter of weeks left before they’re switched off entirely. The first iPhone concentrated heavily on just a few pre-built apps with a strong focus on telephony; allegedly Apple CEO Steve Jobs was paranoid that any more complex apps might interfere with a phone call, which would never do if they were going to take on industry heavyweights such as Nokia.

Fast forward a decade, and a brand that’s bought the rights to the Nokia name is launching Android phones locally at budget price points, because that’s what the Nokia name is worth now. Apple has seen astonishing growth in that time, often being the world’s most valuable company, but it’s not just a question of stock market value.

That second iPhone, the iPhone 3G, which launched here in 2008 before anywhere else in the world, changed things because aside from the smooth iOS interface, which refined ideas others had sketched around for years without ever getting quite so right, the secret sauce was in the apps, and the ability to get external developers to make apps for the iPhone. Apple still keeps a tight rein on the types of apps it will let play in its iPhone garden, but from that grew competitors such as Google’s Android, which offers more flexibility, albeit sometimes at the cost of whether an app will work or not, plus some security worries.

Before the iPhone’s emergence, mobile networks could carry data, but did so at astonishingly low rates. Now mobile data usage engulfs every other type of mobile usage to a point where if you graph it, you have to squint really hard to make out the volume of calls. Internet user numbers have jumped from the millions to the billions, and while not everyone is using an iPhone (indeed, they’re the minority share against Android) that first kickstart into that position was quite essential.

It’s also changed the way we interact while out and about. Some may decry folks always checking their phones, and there’s perhaps something in that, but at the same time it’s opened up the worlds of photography, social media, and even disruptive new industries like Uber along the way. Fortunes have been made and lost, endless games of Candy Crush and Angry Birds have been played, and there’s been an increasing focus on cloud-based services that extend way beyond mobiles to our desktops and laptops.

Apple’s somewhat slowed its innovative pace since those early iPhones, so whether we’ll look back on the second decade of iPhones as such a radically changing time feels a little unlikely. I guess we’ll find out when we’re using the iPhone 15 or 16 sometime in 2027.