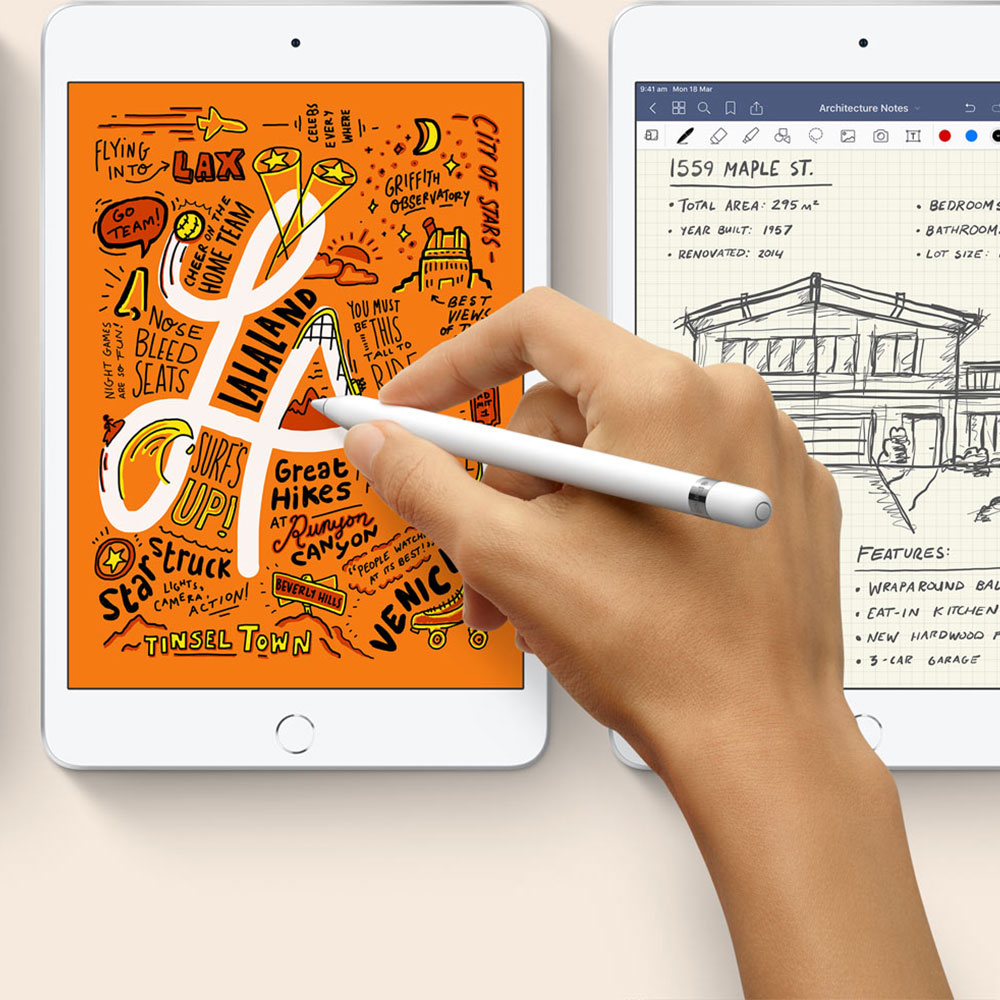 Apple recently refreshed its lineup of iPad tablets, adding the first new small tablet it’s had for four years with the introduction of the Apple iPad Mini (2019). Confusingly, it’s still just called the Apple iPad Mini, so if you were buying one, it’d be a good idea to make sure that somebody wasn’t trying to sell you the older model. It’s the same story, by the way, for the new Apple iPad Air.

That potential confusion is understandable from the outside, where the iPad Mini has essentially the same design it’s always had. What you’re looking at is a 7.9 inch display with reasonably wide bezels (by 2019 standards) and a choice of space grey, silver or gold finishes. Opt for the space grey and you’ll get black bezels, while the silver and gold iPad Minis both have bright white bezels instead. It’s a very “Apple” look, if you’re at all familiar with its very popular iPhone lines of recent years.

The new iPad Mini has even more throwback technology to bear, with the older TouchID fingerprint sensor and home button where the new iPad Pros have instead Apple’s nifty “FaceID” cameras and smaller bezels. It recharges via Apple’s proprietary lightning connector, where again the iPad Pro lines have shifted to the more common USB C standard, making them compatible with a range of peripherals — and a lot of third party mobile phone chargers too.

So if all that is somewhat old school, what’s new in the iPad Mini? Well, for a start, it’s now compatible with the Apple Pencil stylus. This will cost you extra, and I can’t claim to have particular artistic skills, but artist colleagues of mine swear by the Apple Pencil for its accuracy and range of motion. There are a few catches here for iPad Mini buyers, however, because that smaller display screen means there’s less sketching space, and the full pencil size feels a little odd on such a small display. Where the newer USB C connected Pencil connects magnetically to the side of the iPad Pro, the older lightning-connected Pencil has no such facility, so you’ll have to carry it separately. The USB C and Lightning model Pencils also don’t work across both device types, so again it’s important to make sure you’re buying the right model for your iPad Mini.

It’s underneath the glass that Apple’s made the biggest change, putting the A12 Bionic chip that also powers the iPhone XR, iPhone XS and iPhone XS Max into use. It’s very fast and very powerful, so there’s no particular issue running any tablet app available for iOS right now. You can run split-screen apps and have picture-in-picture video running without a power problem, although again the iPad Mini’s smaller display isn’t always ideal for this kind of usage.

However, having tested out the iPad Mini 2019 for the past couple of weeks, I can’t help but come to the conclusion that, even if you’ve got your heart set on an iPad, this isn’t the model that most people should buy.

That’s because it’s primarily best if what you genuinely need is a really small tablet. Apple still charges quite the premium price for the Apple iPad Mini 2019, especially if you opt for the LTE-enabled variant that lets you drop a SIM card in for mobile data, or the higher storage variants.

It’s still fundamentally sold as a tablet for content consumption — watching video, browsing the web and playing games — and for that, the cheaper (and larger) 2018 model Apple iPad is more likely to match your needs. If the Pencil support excites you and you want more power than that model offers, there’s the new iPad Air, or if you’re particularly cashed up, the actual iPad Pro models.