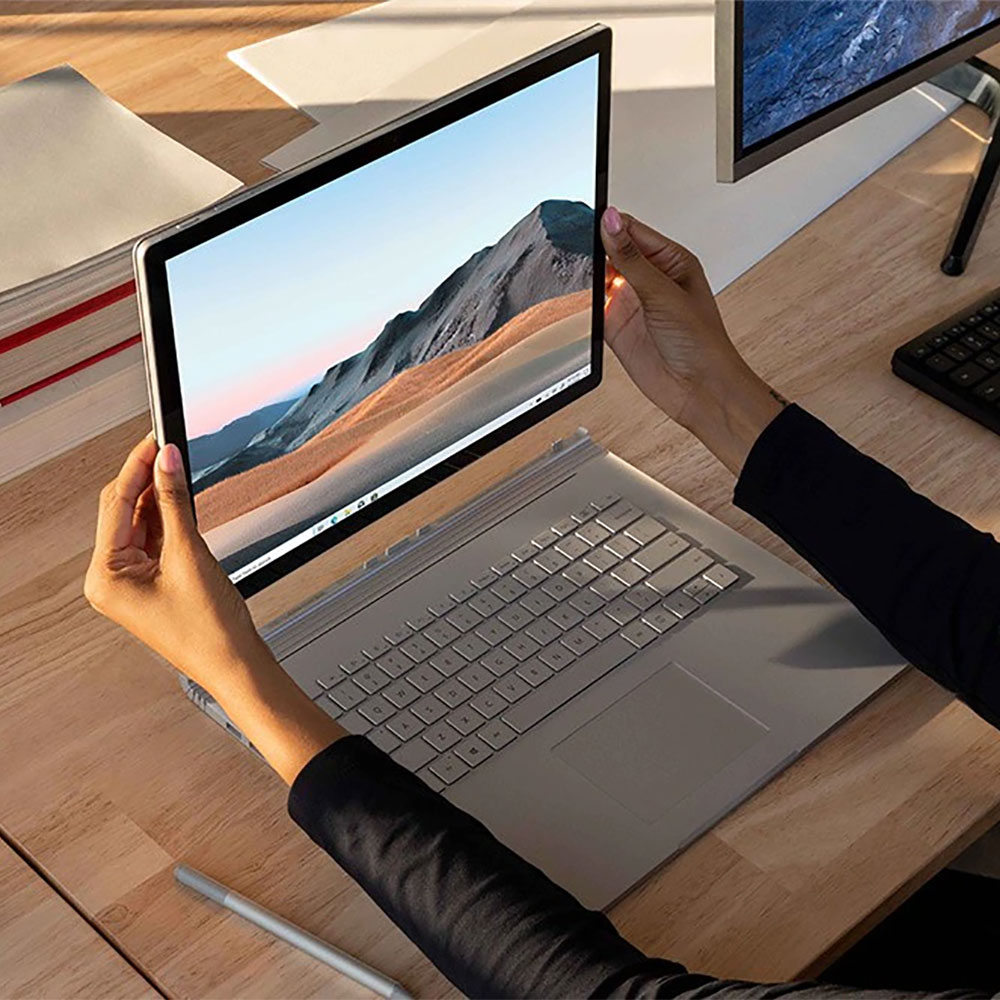 Still, that’s not why you might want to buy a Surface Book 3. The major selling point for the Surface Book 3 is that, like the Surface Pro, it’s also a tablet. However, where the Surface Pro line is sold as tablets that can also clip on a keyboard at extra cost, the Surface Book 3 rather flips that assumption. Out of the box, you’re facing a rather starkly designed – but still quite attractive – laptop. It looks like a laptop with either a 13.5 or 15 inch display – I’ve been testing out the smaller variant, for what that’s worth – standard keyboard and trackpad, and of course standard Windows 10 installation. So far, so good, and Microsoft’s big pitch for the Surface Book line is that it’s meant for digital creative types.

That’s where the tablet bit comes in. There’s plenty of models on the market right now that can flip their screens around to become effective tablets, with the bottom of the tablet then being the exposed keyboard, but that’s not what the Surface Book 3 does. Instead, at the press of a button, the entire display actually removes from the keyboard, becoming a full standalone tablet device. Microsoft has some interesting engineering at play here, because it mechanically separates and docks every time you switch it from being a tablet to being a laptop, or vice versa. Nobody else quite does this kind of approach, and it’s very cool technology – but it does have some drawbacks to keep in mind.

There’s a few different configurations of the Surface Book 3 depending on how much you want to spend, but they all rely on using reasonably powerful Nvidia GPUs (Graphics Processing Units) to give them power for creative tasks like photo or video editing, or CAD, or pretty much whatever you’d like to throw at them. Those Nvidia GPUs are physically present in the “keyboard” bit of the Surface Book, but that means they’re not connected when you have them in tablet mode. Instead, you drop back to Intel’s own significantly less powerful Iris Plus GPUs on board, making them more useful for less intensive tasks like web browsing or video presentation.

The mechanical nature of that dock and the essentially unchanging design of the Surface Book 3 also means that it’s fairly heavy for what you might expect out of a premium laptop in 2020. Most of Microsoft’s competitors produce what are usually called “ultrabooks” in this price range, trading on weighing in at around 1kg complete. The full Surface Book 3 with keyboard weighs in at between 1.53-1.64kg, depending on configuration choices for the 13.5 inch model, and of course more for the 15 inch variant. That might not sound like much if you’re working at it on your desk, but if that’s the case most of the time, a laptop with a detachable head is probably overkill.

That detachable base does at least give the Surface Book 3 reasonable battery life, even if you push it hard. Like the GPU, Microsoft splits battery capacity between the base and tablet/screen part, so you can expect less power if you’re using it as a screen only. Still, I could pretty easily get through a day’s work on the Surface Book 3 without too much fuss, although to be clear, I mostly used it as a laptop first and tablet second.

Microsoft also charges a fairly hefty premium for that detachable technology, and I’m left wondering exactly how many creative use cases there are for it that aren’t met by those flippable type ultrabook models, many of which can be had for much less than the Surface Book 3 costs. Local pricing starts at $2,649, but can go as high as $4,759 depending on screen size and internal storage and processor choices, so these aren’t cheap systems by any stretch of the imagination.

What’s more interesting to me is that Microsoft’s now into its third generation of detachable screen Surface devices. There’s quite a few competitors or imitators for the other Surface style devices, and that’s very much within Microsoft’s plan. It’s always pitched Surface devices as being templates that others could build on, because it didn’t want to go to market war with the likes of Dell, HP, Acer and the rest when it very much relies on them for so much of its Windows revenue. However, in the years since the original Surface Book emerged, it’s really not been grabbed by any other maker as a viable market model to copy. Sometimes, new innovations in technology might be cool, but if they’re not particularly desirable by more than a niche market, they can really struggle to take off.